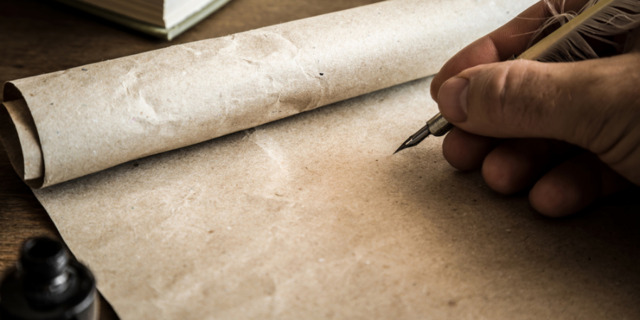 This story was originally published on LDS Living in January 2018 and has been updated.

The earliest scripture revealed in the Restoration, the Book of Mormon’s “lost 116 pages,” disappeared 193 years ago this summer, never to resurface. But evidence is emerging that provides new discoveries about those lost pages. Here are nine of those discoveries:

1. Joseph and Emma worked together as husband and wife on the first part of the translation.

It has long been known that Emma Hale Smith scribed for the translation. Using details she gave in interviews, we can now identify which part of the text she recorded. Emma says that when she scribed for Joseph, he could not pronounce the name “Sariah” and was shocked to find that Jerusalem had walls.1 Since both Sariah and Jerusalem’s walls appear early in the Book of Mormon, and since we know from the handwriting on the original Book of Mormon manuscript that Emma did not scribe for 1 Nephi, this means that Emma assisted Joseph at the beginning of Lehi’s story in the lost manuscript and was thus his first scribe in the work of translation.2

2. Martin Harris considered the translation of this manuscript so important that he made tremendous sacrifices for it.

Joseph says Martin scribed for him in Harmony, Pennsylvania, from about April 12 to June 14, 1828.3 During that same period, back home in Palmyra, Martin missed his daughter’s wedding and the planting season on his farm.4 Martin was sufficiently impressed with the importance and sacredness of the manuscript he was transcribing that he sacrificed being present for those events.

► You may also like: These historic resources can amplify your ‘Come, Follow Me’ study right in the Gospel Library app

3. The story that Martin Harris’s wife Lucy burned the manuscript arose decades after the fact.

When Martin first brought the manuscript home, his wife Lucy kept it locked in her bureau. Martin moved it to a locked drawer in his own desk, but the manuscript mysteriously disappeared. Revelation later described a collusion by “wicked men” who had taken the manuscript to alter its words to create apparent contradictions if Joseph retranslated it (D&C 10:8–18). A widespread story, often used to impugn this revelatory explanation, is that the manuscript was not doctored by wicked men but burned by Lucy Harris. Analyzing the accounts which repeat this story shows that it first appeared nearly a quarter of a century after the fact, when it was offered by Orsamus Turner in 1851 as a conjecture alongside the possibility the manuscript was merely hidden. Turner’s conjecture was repeated with greater and greater certainty across time. So the further the accounts get from the actual theft and anyone who really knew what happened, the more certain they become that Lucy Harris took the manuscript and burned it.5

4. Lucy Harris denied on her deathbed having taken the manuscript.

It is notable that as long as the manuscript was in Lucy Harris’s care—locked in a bureau to which only she had the key—it remained perfectly safe. That alone should cast doubt on her guilt. But perhaps the most compelling reason to question her role in the manuscript’s disappearance is her unwavering declaration of innocence, preserved within the Harris family. Speaking at Ricks Academy, now BYU-Idaho, Martin Harris, Jr. recounted Lucy Harris’s response to the manuscript theft, as described to him “many times” by his father Martin: “she declared positively that she had not touched it & knew nothing about it & on her death bed she still declared that she had never seen them & knew nothing about them & she called God to witness the truth of her statement.”6 As a devout Quaker whose every word was to be spoken as if under oath, Lucy Harris almost certainly would not have gone to God while repeating lies. What should we make of Lucy Harris’s emphatic deathbed statement? We would do well to note the conclusions of one who knew her character well and who would not at that time have been inclined to give her the benefit of the doubt—her estranged husband Martin. He believed her deathbed statement absolutely.

5. Joseph Smith disclosed some of the contents of the lost manuscript to others.

Apostle Franklin D. Richards once overheard the Prophet Joseph relate information from the lost manuscript (described below). Not surprisingly, the Prophet also shared such information with his father, Joseph Smith, Sr. In turn, Joseph Sr. shared some of that information in an 1830 interview with Palmyra resident Fayette Lapham.7 Lapham’s published interview gives information about the coming forth of the Book of Mormon (like the correct translation order of the small plates and Mormon’s abridgment) that it took scholars another century to discover. Joseph, Sr. also gave Lapham details of the stories of Lehi, Nephi, and Mosiah that cannot be found in the available Book of Mormon text but have the marks of genuineness. These new details fit those stories hand-in-glove and answer questions raised by the available Book of Mormon text.

6. Ishmael was of the tribe of Ephraim.

7. Lehi’s temporal deliverance from the destruction of Jerusalem occurred during a Jewish feast that symbolized the redemption of the world by the Messiah.

In his 1830 interview, Joseph Smith, Sr. described a “great feast”—a religious festival—in Jerusalem at the time of Lehi’s departure and gave this as the reason for Laban’s drunkenness. This fits Nephi’s account that Laban had been “out by night” with “the elders of the Jews” (1 Nephi 4:22). Other details in Nephi’s account allow us to identify the festival and its connection with the redeeming work of the Savior. Seen in this light, the first story in the Book of Mormon, that of Lehi’s temporal deliverance, is a “type” for the redemption of the world by the Lamb of God.9 From its very start at the beginning of the lost manuscript, the Book of Mormon is a testament of Christ.

8. The lost manuscript answered questions raised in the available Book of Mormon text.

One of the unanswered questions of the Book of Mormon is how the interpreters or Urim and Thummim given to the brother of Jared got to the Nephites.10 The available Book of Mormon text tells us that before the Nephites found the 24 Jaredite plates, they had already acquired the interpreters (Mosiah 8:6–14). How did they acquire them? That it does not tell. But Joseph Smith, Sr. narrated to Fayette Lapham in detail how one of the ancient Nephites was led to the Jaredite interpreters in the promised land by the Liahona, evidently taking this narrative from the lost manuscript.

9. The lost manuscript identifies the temple as a place to converse with God through the veil.

In the Joseph Smith, Sr. narrative above, the finder of the interpreters—probably Mosiah I—took the interpreters into a “tabernacle” or portable temple to inquire of the Lord how to use them. When Mosiah I entered the tabernacle, the Lord asked, “What is that in your hand?” Mosiah responded that he “did not know, but had come to inquire,” and the Lord revealed the answer. Then, as now, the temple was a place to converse with the Lord and seek to enter His holy presence.

The lost manuscript is still “lost.” But we have not been left without evidence of what was in it. Using the information we have been provided about this missing Book of Mormon text can deepen our study and understanding of the remarkable Book of Mormon text we do have and strengthen our testimonies of this second witness of Jesus Christ.

Don Bradley completed an internship with the Joseph Smith Papers Project and a Master’s degree in History at Utah State University. He is the author of The Lost 116 Pages: Reconstructing the Book of Mormon’s Lost Stories, published by Greg Kofford Books, and was also the primary researcher for the Joseph Smith’s Polygamy series by Brian C. Hales. He is doing further research on the lost 116 pages and welcomes additional information readers may have on the subject. He can be reached through https://www.facebook.com/lost116pages/.

2. The handwriting when Sariah’s name is first used in 1 Nephi is not Emma’s but Oliver Cowdery’s. The handwriting when Jerusalem’s walls are first mentioned in 1 Nephi is also not Emma’s and is likely that of one of the Whitmer brothers. Royal Skousen, The Original Manuscript of the Book of Mormon: Typographical Facsimile of the Extant Text (Provo, UT: Foundation for Ancient Research and Mormon Studies, Brigham Young University, 2001), p. 14. 1 Nephi was translated in June 1829, after Joseph moved from Harmony, Pennsylvania to Fayette, New York. Emma did not immediately accompany him in this move, but joined him later, making it impossible for her to have been the scribe for early 1 Nephi.

4. The marriage of Martin’s daughter in Palmyra on May 8, 1828, was announced in the Wayne Sentinel, May 9, 1828, p. 2. The unseasonably warm spring that led to the early (mid-April to mid-June) planting season in upstate New York is described in Cary J. Mock, Jan Mojzisek, Michele McWaters, Michael Chenoweth, and David W. Stahle, “The Winter of 1827–1828 over Eastern North America: A Season of Extraordinary Climatic Anomalies, Societal Impacts, and False Spring,” Climatic Change 83 (2007): 87–115.

5. Orasmus Turner, History of the Pioneer Settlement of Phelps and Gorham’s Purchase (Rochester: William Alling, 1851), p. 215. An anonymous local historian picked up Turner’s conjectures five years later, emphasizing the possibility that Lucy Harris burned the manuscript. Eleven years later, in his Origin, Rise, and Progress of Mormonism (New York: D. Appleton and Co., 1867), Pomeroy Tucker recast this possibility as a certainty, and nearly all other non-Latter-day Saint writers followed suit. For an analysis of this trend and other evidence on the manuscript theft, see Don Bradley, The Lost 116 Pages: Reconstructing the Book of Mormon’s Missing Stories (Salt Lake City: Greg Kofford Books, 2019), pp. 57-82.

7. Fayette Lapham, "Interview with the Father of Joseph Smith, the Mormon Prophet, Forty Years Ago. His Account of the Finding of the Sacred Plates," The Historical Magazine and Notes and Queries concerning the Antiquities, History, and Biography of America [second series] 7 (May 1870): 305-309, in Vogel, Early Mormon Documents, 1:456-466. Mark Ashurst-McGee of the Joseph Smith Papers Project is the scholar who has given Lapham’s interview account the closest analysis. Ashurst-McGee identifies some errors in Lapham’s account but concludes from Lapham’s accurate reporting of many other confidential details that he must have made use of contemporaneous interview notes. Personal communication from Mark Ashurst-McGee, September 26, 2017.

9. For more on Joseph Smith, Sr.’s statement giving a festival setting for the beginning of the Book of Mormon, see Don Bradley, “A Passover Setting for Lehi's Exodus,” Interpreter: A Journal of Latter-day Saint Faith and Scholarship 34 (2020): 119-142.