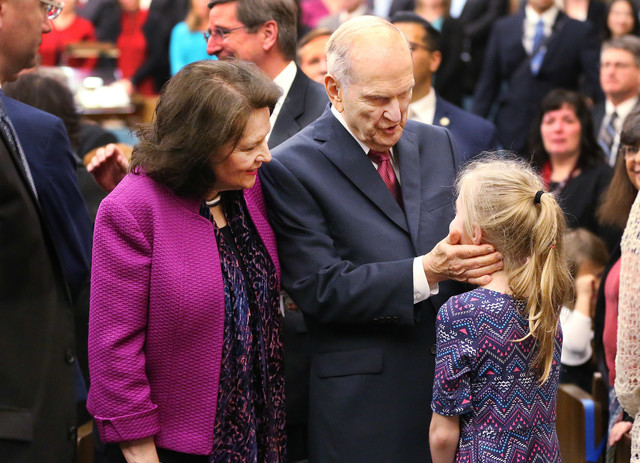 Two months after the Camp Fire savagely claimed an entire community here, President Russell M. Nelson surveyed the ashes of Paradise on Sunday and spoke to the community’s Latter-day Saint residents about loss — his and theirs.

“We can hardly comprehend the tragic losses that you have sustained — loss of life, loss of homes, loss of jobs, work places, and much, much, more,” said the leader of The Church of Jesus Christ of Latter-day Saints during a special conference held for members of the Chico California Stake, which includes two units in Paradise. “The accounts of your suffering are exceeded only by the accounts of your ministering.”

President Nelson’s words were delivered just two days after the death of his daughter, Wendy Nelson Maxfield, to cancer.

“We mourn the loss of our second daughter,” said an emotional President Nelson in an interview after surveying the ashes of Paradise. “Fathers can’t have that without feeling a deep sense of grief. And yet there is nothing we would rather do than to try to be of help to others.”

His example of care for others resonated with Latter-day Saints in Paradise, who also found peace and hope in the service of others after fire destroyed their community on Nov. 9.