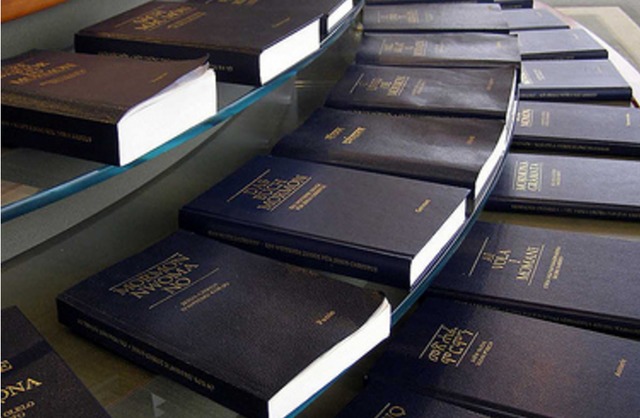 Baptist Minister: "I Embrace and Believe the Book of Mormon"

"I’m a licensed Southern Baptist minister and I embrace the Book of Mormon."

That is how Lynn Ridenhour begins his article "The Baptist Version of the Book of Mormon," which he admits is a tongue 'n' cheek title, because he believes the whole book, finding that, "there is absolutely nothing in it that contradicts the Bible."

But, Ridenhour is sure to notify readers that this fact doesn't deter his current path of faith:

"I believe the truths recorded in it. No, I’m not a convert to the Mormon faith, nor am I a member of any particular 'spin-off' restoration group such as the RLDS (Reorganized Latter-day Saints), Hedrikites, or Strangites. I’m still a Baptist minister. To be exact, I’m "charismatic Baptist." . . .

"And you know what?…

"I still believe the Book of Mormon too!

"I know. I can hear you now. '…A charismatic Baptist minister who believes the Book of Mormon?! Impossible. That’s like a Protestant Pope…' No, it’s not. It’s not a contradiction.

The two go hand in hand, really—Protestant doctrine and the Book of Mormon. They’re not at odds. . . . In fact, I discovered, the Book of Mormon is more "Baptist" than the Baptist hymnal in places. I know that’s hard to believe, but it’s so. I read the Book from cover to cover and found as a Baptist minister, there is absolutely nothing in it that contradicts the Bible.

From Fearing Latter-day Saints to Believing Their Book

After revealing this surprising fact, Ridenhour backtracks, giving readers a glimpse of his life growing up to show that, like many in the world, he once believed the Church was a cult and something to be feared.

"Reared in a small conservative Baptist church back in the hills of the Ozarks, I was taught with strong convictions that Latter-day Saints were no different from Jehovah Witnesses, Christian Scientists, or Armstrong followers. They all sooner or later knocked on your door. We were instructed by our parents to '…let none of them in the house. And don’t buy their materials…' All were cults. Certainly the Latter-day Saints were not within mainstream Christianity.

"I was taught that the Book of Mormon was a lie. We have the Bible and no man was to add to the scriptures lest his soul be damned."

But, when he "experimented on the word" and gave the Book of Mormon a try, he couldn't deny the truths held within.

How the Book of Mormon Restores Lost Covenants

In answer to his friends' ceaseless questioning that, "you don't really believe in that book, do you?" Ridenhour provides a complex answer that dives deep into Protestant doctrine and canonization. He says most people do not object to the truths within the Book of Mormon because, in fact, most have not read it. What most critics object to is the idea of adding to the Bible and changing the canon of what is scripture.

But Ridenhour points out that "the concept of canonization became popular with the Church around the time of Constantine, a period when the Church became infiltrated with nationalism and worldly teachings." He points out that this idea, as well as that of the rapture, are the only ones that might stop a Protestant from embracing the Book of Mormon—and he illustrates that both of these doctrines don't actually come from the Bible or scripture at all. They instead result from politics or doctrines that were added later on.

Then, Ridenhour dives into the Book of Mormon itself, teaching others what they can learn from this inspired book. He insists that the central theme of the Book of Mormon is the restoration of covenants. Ridenhour explains that most people overlook the fact that the Bible itself is a covenant document because many of the covenants within it have been lost. He says:

The Book of Mormon is a revelation of the covenants being restored among His people in these latter days. When a people sign a contract, they act differently (especially if the contract is with God!). They weigh the consequences. In these latter days we will again begin to know what it means to sign a contract with the Lord of Hosts, and act accordingly. A revelation of biblical salvation will return to his people. Praise His name.

Joseph Smith and His Crowning Work

As his conclusion, Ridenhour takes another surprising turn. After praising the book, he then turns to the man who translated the book, Joseph Smith. Citing historical accounts, Ridenhour proves Joseph Smith's integrity, his simplicity, humility, and sincerity, ending with the plea that "concerning the Book of Mormon and the man," those once hostile may have opened and changed their minds to these wonderful truths.

This article originally ran on LDS Living in 2016.