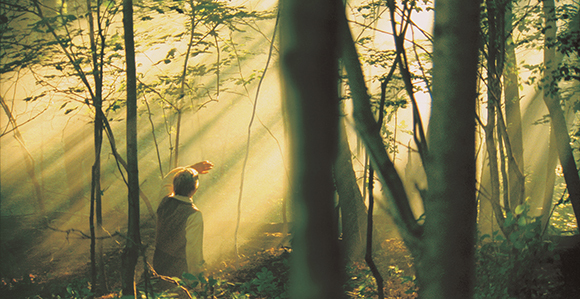 “Great effort has been taken to portray things as accurately as our knowledge of history permits. We hope that this will become the reference portrayal of the First Vision in classrooms, homes, and personal study,” said John Heath, a communications manager in the Church History Department.

A new film about the First Vision will receive its broadcast premier this Saturday, March 4, immediately preceding the live broadcast of Face to Face with President Henry B. Erying and Elder Jeffrey R. Holland.

Tune in 15 minutes early to see a stunning new depiction of the events in the Sacred Grove titled Ask of God—Joseph Smith’s First Vision at 10:45 a.m. mountain standard time on LDS.org or the LDS Youth YouTube channel. The movie will be broadcast in English, Spanish, Portuguese, and Mandarin and will be available to download and share following the event.

The film was originally released in the Church History Museum in October 2015, where it is shown in a 240-degree surround format for an immersive experience. Now it has been remastered to fit traditional screens and will be broadcast for the first time prior to the Face to Face event.