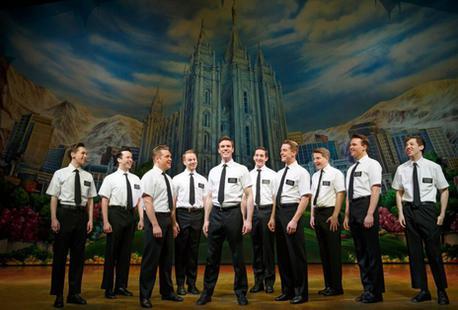 The Book of Mormon," from Trey Parker and Matt Stone with music by Robert Lopez, may be the best "South Park" episode yet.

OK, so it’s not actually part of the "South Park" series, but you couldn't blame theatergoers for mistaking it as such. Substitute Cartman and the gang for a district of naively eager Mormon missionaries (with cleaner mouths than the "South Park" kids, of course), add some of the catchiest music to come from Broadway in years, crank the raunch level up to 11, and you’ve got "The Book of Mormon."

If you aren’t familiar with Parker and Stone's adult-themed animated series about foul-mouthed elementary school kids and you are considering seeing "The Book of Mormon" during its Salt Lake City run, you might want to dip your toe in those waters first.

And to my faithful Mormon friends thinking of seeing "The Book of Mormon," know that it's not going to ruin your testimony of The Church of Jesus Christ of Latter-day Saints. But it does poke major fun at what you believe. If you still decide to go, consider what LDS scholar Richard Lyman Bushman, author of "Joseph Smith: Rough Stone Rolling," told CNN when the show came out on Broadway.

"Mormons experience the show like looking at themselves in a fun-house mirror," he said. "The reflection is hilarious but not really you. The nose is yours but swollen out of proportion."