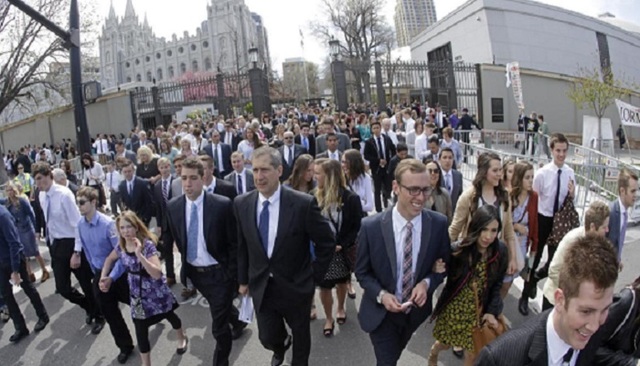 The Huff Post and BYU's The Daily Universe teamed up to conducted roughly 60 interviews with college students, many of whom were Mormon, to find out about their political views.

As the Huff Post notes, their findings were not scientific but they did show some surprising shifts in millennial Mormons' political stances versus older generations.

According to the Huffington Post article, there were a few themes that emerged throughout the interview.

Young Mormons are more likely to identify as moderates.

According to research from Religion Service News senior columnist Jana Riess, millennial Mormons could be less likely to identify as a Republican compared to previous generations.

Her research, which was cited in the Huff Post article, also mirrors that of the 2017 study "America’s Changing Religious Identity" by the Public Religion Research Institute. According to this study, which surveyed more than 100,000 Americans and included 1,740 members of the Church, showed that 4 in 10 Mormons identified themselves with the GOP party and 57 percent identified as conservative, which was even lower than Riess's study.

The Huff Post article also noted that some of those interviewed said they identified more as moderates and felt their political views were more liberal than their parents' views.

“Older generations are more set in their ways and they are unwilling to even consider changing the current system,” said Conner Leavitt, a 24-year-old at Utah Valley University, according to the Huff Post. “My peers and I are willing to think outside of what we have experienced and try new things to try to find something better than our current system.”

According to the Huff Post article, there is evidence to suggest that younger Mormons take into account their religion when voting.

“Mormon millennials tend to consider religion in a lot of their voting and especially in voting on social issues,” 23-year old BYU senior Katie Orr told the Huff Post. “It does enter the conversation of ‘Do I think this a righteous thing; do I think this is a moral thing; do I think that this is ultimately helping families or helping religious people to express freedom of religion?’”

In a time when millennials are known to be leaving Protestant religions in droves, Mormon retention rates are holding relatively steady, at 64 percent, slightly below Evangelical Protestant and above Catholic retention rates, according to Pew Research.

Though down from previous years, Riess says  Mormon millennials have "sky-high rates of belief in God, Christ’s mission and resurrection, and other core theological ideas."

Though each generation has a different political outlook, the anecdotal findings from the Huff Post and The Daily Universe could indicate a shift in Mormon political views that could shape how Church members vote in coming elections.