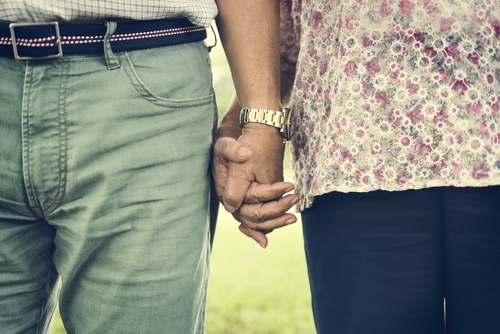 My wife and I recently celebrated our 27th wedding anniversary. It has been a wonderful 27 years. It has also been a difficult 27 years. I’ve had to put up with some things; she’s had to put up with a lot more. All successful marriages are a composite of happy and sad experiences. The key is being able to get through the difficult times.

The scriptures contain many principles related to building a stable and healthy marriage. Several of these principles actually come from a description of marital strife—one of the few recorded in ancient scripture.

After being called as a prophet, Lehi’s family experienced grief like never before. They were persecuted, threatened, and eventually forced into exile. Whereas a short time before they enjoyed a peaceful, prosperous life in Jerusalem, they were soon living in tents in a desert. After taking his family into the wilderness, Lehi sent his four sons back to Jerusalem to retrieve the brass plates from an uncooperative tyrant. Traveling in the desert was dangerous in general, and there was no assurance their sons would return safely.

Lehi’s wife, Sariah, was a faithful woman who had followed her husband’s spiritual promptings, but even faithful people have their limits. As the days turned to weeks and Sariah’s sons did not return, her doubts increased. In a moment of frustration, she complained to her husband, Lehi: “Behold thou hast led us forth from the land of our inheritance, and my sons are no more, and we perish in the wilderness” (1 Nephi 5:2). In other words, “You took us from our comfortable home, you have sent our sons to their death, and you are going to be the death of all of us.”

Have you ever been the victim of a similar accusation? Have you ever felt blamed for some difficulty in your marriage? I imagine the natural man in Lehi wanted to respond in kind, finding reasons to blame his grieving wife for her lack of faith. Yet he resisted the temptation and responded with compassion and faith. Let’s examine Lehi’s response, as it contains truths we can use to strengthen our own marriages and relationships.

Sariah accused Lehi of being a “visionary man.” I’m not sure this was meant as a compliment at the time. Lehi could have reacted with anger or defensiveness. Yet his response showed confidence and accountability: “I know that I am a visionary man” (1 Nephi 5:4). He went on to explain that because of his visions he was able to preserve his family from certain destruction, even though their present situation was less than desirable. Lehi took responsibility for his choices and decisions, avoiding the temptation to blame or discredit others.

In my experience, almost all relationship problems are two-sided. Sometimes the balance of responsibility is lopsided, but there is always something each party can change in order to make things better. If you find yourself waiting for your spouse to change in order for your marriage to improve, you might have a long wait ahead of you. Don’t wait for others. Examine your behaviors, thoughts, and words and the impact they have on your marriage. If there is something in your life you can change, change it. Many say, “But it’s not my fault! Why should I be the one to change first?” I propose that it doesn’t matter whose fault it is; that’s like arguing over why your car has a flat tire. We can argue all day about why the tire went flat, but until we change it, all forward progress is stopped. Take responsibility for your own issues and change what needs to be changed. In fact, if one party is willing to change and makes the first move, this will often increase desire in the other party to follow suit and change as well. Like Lehi, we can acknowledge the statements of others and our own decisions instead of becoming immediately defensive.

2. Have Hope for the Future

Lehi remarked to his wife, “I have obtained a land of promise, in the which things I do rejoice” (1 Nephi 5:5). He was clearly aware of their current situation and how it was much less comfortable than they had enjoyed for many years in Jerusalem. Lehi probably didn’t enjoy “tent life” any more than Sariah or the rest of the family did. Yet he chose to focus on what was to come, what was waiting for them after the wilderness. They were still separated from the promised land by many miles, many trials, and much more grief, but Lehi had his eye on the prize. Dwelling on the “good old days” or their current sufferings was not productive, so he focused on the hopeful future.

Have you noticed that almost all marital problems are focused on the past? When couples come for counseling, they typically describe issues that have happened in recent days, weeks, or years. I’ve yet to see a couple come for help saying, “Things have been really good, but I’m pretty sure they are going to go sideways in the future, so we’d like to talk about our upcoming problems.” Of course, I’m being somewhat glib about this. But consider what would become of marital problems if the future was given equal weight with the past.

Instead of focusing on what has gone wrong, what about having hope for what could go well in the future? I’m not suggesting we ignore the past or avoid problems that need attention. I am suggesting we temper our past regrets with future hopes. If your or your spouse’s characteristics are not exactly what you desire today, is there potential for change? Of course! The future has so many wonderful possibilities for those who try to improve their lives. As you deal with issues in your marriage, keep your hopes high for the future. If you treat your spouse as who they can become instead of what they have been, this can create hope for both marriage partners.

3. Trust in the Lord

Lehi concluded his response to Sariah’s murmuring by stating, “I know that the Lord will deliver my sons out of the hands of Laban, and bring them down again unto us in the wilderness” (1 Nephi 5:5). The scriptures then record that Sariah was comforted because of the words of her husband. True to his faith in God, Lehi’s sons did return without harm, having fulfilled the commandment they had received, and Sariah’s faith was sustained as she listened to the testimony of her husband.

Those familiar with the story of Nephi and his brothers’ return to Jerusalem know they encountered many difficulties and trials. Yet even from the beginning, Nephi had faith they would be able to complete their task. “And it came to pass that I, Nephi, said unto my father: I will go and do the things which the Lord hath commanded, for I know that the Lord giveth no commandments unto the children of men, save He shall prepare a way for them that they may accomplish the thing which He commandeth them” (1 Nephi 3:7). Despite the difficulty of the undertaking, God provides a way for His children to complete all tasks they receive from Him.

How does this apply to marriage? Well, for me there have been times when the idea of traveling through a dangerous desert to get records from an obstinate, murderous alcoholic seems like a walk in the park compared to navigating certain marital difficulties. After many years of marriage, I have learned that marriage is designed to be a challenge.

I remember the exact moment when I received the revelation that I should marry Kristyn, my amazing wife. The impression was completely clear. I know with certainty that she was the one the Lord chose for me. Even so, our marriage has not been free of difficulties. There have been bumps and bruises along the way. We have each had to make changes to our personalities and patterns in order to create harmony. I have often reflected on how there are many ways in which my wife and I are quite different. I have thought that our marriage would have been easier if we were more compatible. Then the Spirit has whispered, “But you wouldn’t have experienced nearly as much growth if it weren’t for those differences. Kristyn is perfect for you, not because you are so compatible, but because of who you will become as you work out your incompatibilities.” I am so grateful for this knowledge.

Your marriage may very well be the most difficult journey you’ll ever embark on in life. I believe Father in Heaven wants all marriages to be successful. Because of that, you are entitled to His assistance as you navigate marital challenges. Nephi’s testimony applies to all of God’s commandments; a way will be provided for us to accomplish what He has commanded. As you struggle to sanctify your marriage and work through challenges, remember you are on the Lord’s errand. You will receive His help as you learn to listen to each other without blame and have patience with your individual weaknesses. Trust in Him and seek His direction; He will provide the way for your success.

The way will not be easy and will most likely test your limits, but He will help you. If you have experienced a failed marriage, do not despair. Your Father in Heaven has a plan for you and all will be made well as you follow His direction. The same applies to those who have not had a chance to marry yet; trust in the Lord and His divine timing. Lehi and his family eventually reached the promised land. You will reach your divine destiny as well, in the same way they did: step by step, trusting in God, and tackling your trials one at a time with heavenly help. Not only will you accomplish the goal, but you will become more like your Father in Heaven as you successfully defeat each difficulty.