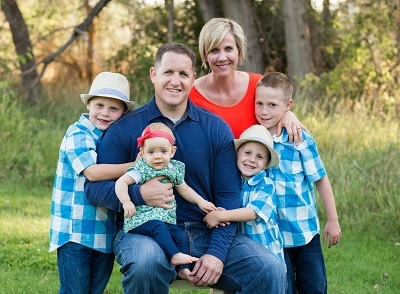 Jared Smith was rafting with a group of Scouts down the Green River in Flaming Gorge, Utah, on June 21 when the unthinkable happened.

On the day Smith went rafting, he says the river was about three times as strong and as full as it usually is thanks to high levels of water in the Flaming Gorge Reservoir.

Because of this, some of the Young Men/Scouting group had already gone down part of the river before, making the three-hour trip in just over an hour, Smith says.

Smith went on the second trip, this one a little longer than the first and meant to carry equipment for camp. But despite the speed of the river, "It wasn't crazy," Smith says. "There weren't a lot of rapids."

After floating about five miles down the river, Smith, eight older boys, and another leader saw their boat was heading toward a large rock with water cascading over it.

Water immediately began to fill the boat, submerging the gear that Smith and his group had brought for camp.

The boys and other leader were able to bail out of the boat to safety.

When Smith tried to bail, he was sucked into the water swirling around the rock. Fighting for air, he tried to swim to the surface of the water. He broke out of the water once, then twice, only to be pulled down again and again.

"After about the third or fourth time I realized I wasn't going to make it out," he says. "And there was some ambivalence that this was how I was going to die."

Giving it one last chance, Smith says he gave it everything he had to push to the surface. But he says he could feel his body fill up with water.

He never made it.

"I just had this feeling of peace and calm," he says. "And I worried about my family. I had this mental image of my bishop standing on my porch, talking to my wife and telling her I wasn't coming home. And I felt really sad for them and for my family, but I had this overwhelming peace that everything would be okay."

Smith says he breathed in water, and then everything went black.

The next thing Smith remembers is people telling him to get up.

He was alive, thanks to some fishermen who weren't supposed to be where they were.

Seeing some commotion up-river, a Flaming Gorge Resort guide along with a few others decided to investigate. Seeing what he thought was a "blue Cooler" at first, the guide realized it was actually a person floating face down and immediately pulled Smith out of the river and into their boat. Smith was not breathing and had no heartbeat. After performing CPR for about five minutes and after a priesthood blessing, Smith began breathing on his own.

Miraculously, Smith slowly regained consciousness and was alert after about 40 minutes from his first breath. And before Smith was life-flighted to a nearby hospital directly following the accident, he received an additional priesthood blessing from his bishop.

After a few X-rays, Smith's ER doctor determined there was minimal damage to Smith's lungs as well. In fact, Smith says his ER doctor was surprised to see Smith in the ER instead of the Intensive Care Unit.

And after staying overnight just to be safe, Smith was released from the hospital.

"It's nothing short of a miracle that he is still with us," his wife, Heidi, wrote on her Facebook page the day her husband came home. "Thanks for all your prayers and concern for our family. We are very blessed!"

In all, Smith estimates he went at least 10 minutes without oxygen.

"For me, it really strengthened my testimony of the power of the priesthood," Smith says.

The Sunday following the accident, Smith was able to talk with the boys from the rafting trip, sharing his testimony of the priesthood. One of the boys shared Doctrine and Covenants 51:26-27:

"26. He that is ordained of God and sent forth, the same is appointed to be the greatest, notwithstanding he is the least and the servant of all.

"27. Wherefore, he is possessor of all things; for all things are subject unto him, both in heaven and on the earth, the life and the light, the Spirit and the power, sent forth by the will of the Father through Jesus Christ, his Son."

"This scripture resonated through my soul of its truth," Smith says. "If He can create all things and us, then He can work miracles, and we can—through the priesthood."