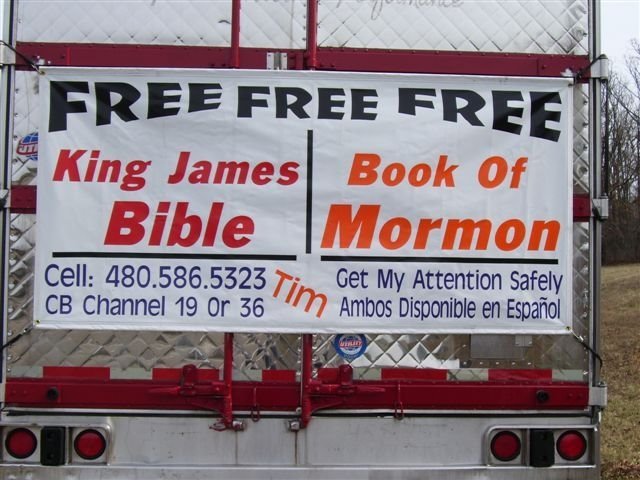 In 1999, Tim Sullivan called himself on a mission. A truck driver by trade, Tim wanted a chance to share his beliefs in God. "I went through much of my life thinking the existence of God to be a myth or fable of sorts," he told former CES employee Thomas Olmstead. "But after several experiences that seemed to involve divine intervention, I began to think otherwise."

As a truck driver, Tim had plenty of time to listen to the radio on long trips across the country. "I had listened to many 'bible thumpers' on truck radio," he said. "I knew them to be wrong."

"God doesn't give us gifts to just sit on," he continued. "They are given to share." Tim's belief that he was commissioned to share spiritual experiences is what motivated him to start his missionary work. He felt that he was called to spread God's word.

The apostle Paul traveled hundreds upon hundreds of miles during his ministry, changing countless lives along the way. The same could be said of Tim Sullivan. Tim made notes of every book he ever gave away. Over the course of two years, he gave away over 200 Bibles and over 80 copies of the Book of Mormon.

He was just getting started.

When things didn't work out with a woman he had hoped to marry, Tim immersed himself even further in the work. "I had no hope, I had no dreams, I had nothing else to lose," he said. "So the Spirit spoke clearly to me: 'Get that stack of books and go forth.'"

Tim painted advertisements for his holy books on the sides of his truck. Sometimes he even attached professionally-made color posters. At each truck stop, Tim would do what he called a "call out." He would drive around the stop, blaring over his CB that he was willing to talk with anyone who was interested in the items he was carrying.

At Tim's own expense, he gave away 5,700 Bibles and 750 copies of the Book of Mormon. He also often gave away music tapes and CDs and LDS books like "Jesus the Christ." He tried to make all his materials available in both English and Spanish.

Tim passed away early this year at the age of 63, a magnificent and inspirational example of somebody who gave their all to furthering God's work. "What I did was unique," he said, "but I knew God would hold me accountable if I didn't share [His word]." Though Tim and his trucks are no longer on the road, his mark will always be felt as his willingness to share his faith resulted in thousands of people being introduced to the gospel of Christ.