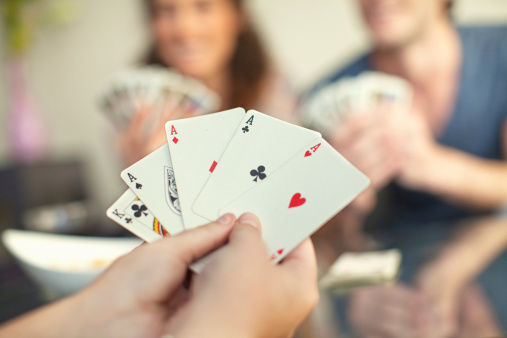 Playing Cards: What the Prophets Have Actually Said

I noticed something on the packing list for my first Young Women camp as a Beehive that has since sparked my interest—a note to please not bring playing cards.

Though I have since noticed that some LDS members shy away from playing cards or do not have them in their homes for a number of reasons, one of the most intriguing reasons members give is that prophets have told us not to own playing cards.

So what have prophets really said about playing cards?

As it turns out, prophets in the past have asked members to avoid playing cards, but it's not for the urban myths and modern-day context we may assume.

These behaviors were especially prevalent in the 1800s, when playing cards were associated with gambling, saloons, and casinos.

And almost from the beginning of the Church, LDS leaders and prophets were concerned with the negative effects and connotations surrounding playing cards, especially since many of these behaviors were not in line with Church doctrine.

President Brigham Young was the first prophet to openly counsel against the use of playing cards, noting, "Card playing and all other games of chance should be avoided as the gate of destruction" (Excerpts from Spencer W. Kimball, "God Will Not Be Mocked," Ensign, November 1974, pg. 6-9).

And this was not the last time he spoke about playing cards. In fact, President Joseph F. Smith mentioned multiple times how playing cards are associated with behaviors that were not appropriate for members of the Church:

While a simple game of cards in itself may be harmless, it is a fact that by immoderate repetition it ends in an infatuation for chance schemes, in habits of excess, in waste of precious time, in dulling and stupor of the mind, and in the complete destruction of religious feeling. . . . There is the grave danger that lurks in persistent card playing, which begets the spirit of gambling, of speculation and that awakens the dangerous desire to get something for nothing (Excerpts from Spencer W. Kimball, "God Will Not Be Mocked," Ensign, November 1974, pg. 6-9).

Before he was called to be a prophet, President David O. McKay also mentioned playing cards in his October 1903 general conference address:

"Those boys who sat, one week ago, in the rear room of a saloon, playing cards for hours, drinking whisky or beer, profaning the name of God—invited into their souls a malady that is more fatal than typhoid fever, or any other disease that can attack the body."

Throughout the next few decades, prophets continued to take a strong stance against playing cards.

President Heber J. Grant spoke on behalf of the Church when he asked members to, "let cards alone" in 1926.

President Joseph Fielding Smith even called playing cards "a habit that cannot too severely be condemned" in Doctrines of Salvation.

It's important to note that up until this point, prophets advised members to avoid playing cards because the context in which they were used was associated with gambling, drinking, unlawful behavior, or wasted time.

In 1943, Elder John A. Widtsoe gave the following response in regards to playing cards:

“It must be added that relaxation from the regular duties of the day is desirable and necessary for human well-being. Wholesome games of recreation are advocated by all right-minded people. Moreover, the . . . objections [to card playing] are not directed against the many and various card games on the market not employing the usual ‘playing cards.’ Most of these furnish innocent and wholesome recreation, and many are really instructive. It is true that they may be played to excess, but in fact it seldom happens. This is true even when such cards are used in games imitating those with ‘playing cards.’ It is true that such cards may be used for gambling purposes, but in fact it is almost never done. The pall of evil seems to rest upon the ‘playing cards’ handed down to us from antiquity” (Evidences and Reconciliations, Murray & Gee, 1943, pp. 218–19).

However, the most recent comments from prophets about playing cards was 40 years ago in 1974 general conference talk "God Will Not Be Mocked" by President Spencer W. Kimball, in which he told members, "We hope faithful Latter-day Saints will not use the playing cards which are used for gambling, either with or without the gambling."

While whether or not Church members own playing cards is not a focal point of the gospel, prophets and apostles have cautioned against their use in the past.

In a 1984 Q&A published in the New Era, a former stake president from Ammon, Idaho, shared this advice:

While it is best to avoid the use of 'playing cards,' my personal experiences indicate that our family has enjoyed many benefits from playing games with cards. At a time when amusements are generally enjoyed alone, for example TV viewing and video game playing, we in our family like to play card games together. It has been both unifying and has provided the arena for much give and take. All in all, playing card games has given us many delightful moments.