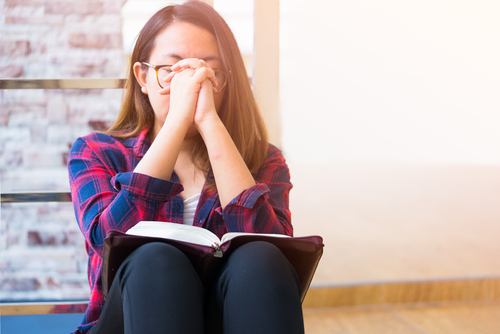 Should I Let My Teenagers Struggle with Their Testimony?

On the first of every month, members of The Church of Jesus Christ of Latter-Day Saints all over the world join in a combined fast and testimony meeting for our church services. The sacrament meeting hour is occupied by volunteer congregational speakers lining up to share their testimony of Jesus Christ and the restored gospel. This meeting can be extremely fulfilling, as genuine, inspired, and heartfelt testimonies can be an answer to prayer.

And yet, as a convert to the Church, fast and testimony meetings were a strange sight to me at first. I still remember the sheer shock I felt when I saw a queue of people waiting to share their conversion stories and other lessons they had learned about the gospel in front of the entire congregation. I had never seen anything like it in my life. Years later, I started to notice a common pattern with many testimonies (even amongst Primary-aged children) where they begin with, “I know this church is true, and I know that Joseph Smith is a prophet . . . ”

Regrettably, over the years, I would habitually tune out during the meeting, finding little spiritual fulfillment when people began with that statement.

It wasn’t until much later, as a married father of three children (two of whom are teenagers) that I realized the power and significance of that most commonly stated introduction.

As a stake Young Men president, I spent considerable time working with boys who grew up in the gospel, attended sacrament and priesthood meetings, and for many years openly expressed their testimony of the gospel. Then, as they reached their teenage years, I started to notice a pattern where many of them at varying times began to struggle, wrestle, and even doubt their faith—and more importantly, what they believed about God’s plan for them and for the Church.

As an eager leader, I would spring into action at the first declaration of these types of statements, considering them as the beginning of a crisis of faith. I would do everything by the book by demonstrating love and commitment. I would spend time with the young men and offer anything I could, including bribery with their favorite candy, food, or games, to inspire them to plant a “mustard seed” of faith and turn their life around.

But I found the more engaged I became, the further away those teenagers went from the covenant path.

Not knowing what to do, I turned to the scriptures for answers. I prayed for help. I pleaded with my Heavenly Father for insight into how to help so many young people who seemed to be sprinting away from making sacred covenants.

I was guided to a simple answer as the Spirit gently whispered three straightforward words into my mind: study Joseph Smith.

This response seemed bizarre and even misguided to me, but I felt strongly that I should follow the prompting. I jumped in deep: I read books on the Prophet’s life, including biographical stories that only the deep annals of the Joseph Smith Papers would likely know about. I studied his presidential campaign, his time as lieutenant general, and even his city planning. But time and again, I felt I was coming up empty-handed; nothing was providing a clear answer.

Frustrated, I turned to Joseph Smith—History in the Pearl of Great Price. It was here that I read:

“I was at this time in my fifteenth year . . . . During this time of great excitement my mind was called up to serious reflection and great uneasiness” (Joseph Smith—History 1:7-8, emphasis added).

The words struck me suddenly. I reread the words “great uneasiness.” In my mind, I stated the obvious fact that I had never fully considered previously: “Joseph Smith was a teenager, and he was seeking to find the truth.”

The Importance of Struggle

Sheri Dew, in her book Worth the Wrestle, states “None of us are entitled to revelation without effort on our part. Answers from God don't just magically appear. If we want to grow spiritually, the Lord expects us to ask questions and seek answers.”

In other words, the Lord expects us to struggle and figure things out.

In line with that, the Book of Mormon has its own examples of wrestling with faith, from Lehi’s wife, Sariah, to Alma the Younger to one of the more famous examples of Enos.

Many are familiar with Enos’s oft retold story of how he “wrestled” with the Lord (Enos 1:2), but I’ll draw attention to verse 1, which states:

“Behold, it came to pass that I, Enos, knowing my father that he was a just man—for he taught me in his language, and also in the nurture and admonition of the Lord” (emphasis added).

Why would Enos emphasize both “nurture” and “admonition” in this verse? In the Church’s manual titled Scripture Study: The Power of the Word, we are taught the power of learning definitions of words. The manual states, “When we understand that definition, the effect of the passage changes.”

From these definitions, we learn that before Enos’s great wrestle, he knew that Heavenly Father feeds and protects us. But he also knew that God will “counsel, reproof, or warn” His children, who have agency to make their own decisions.

How does our Heavenly Father do this? How does he feed and protect us while also counseling, reproofing, and warning us?

The Pattern of the Restoration

Our entire church was founded on the idea that teenagers can build their personal testimony and decide which faith to join, while still making their individual journey on the covenant path. Joseph embodied that pattern and demonstrated that personal struggle makes people strong. Even Joseph, after he asked God about the matters of his heart, later said “I have learned for myself” (Joseph Smith—History 1:20), which is the ultimate goal of anyone’s personal testimony.

I realized through this that when someone asks (or even when you ask yourself), “Should I let my teenager struggle to find his or her testimony?” The clear answer is: absolutely, yes! Nothing is better for the gospel, for it follows the pattern of how the Restoration began.

Now, when I sit in a fast and testimony meeting, I look forward to the testimonies that begin with “I know this church is true and that Joseph Smith was a Prophet.” I’ve gained a new perspective that when a person makes this declaration, they are stating openly that struggling to find a testimony is a good thing and part of the plan.

The Prophet Joseph struggled and then changed the world.

So can every teenager.

InWorth the Wrestle, Sheri Dew examines the process of asking good questions—whether those questions be doctrinal, procedural, historical, or intensely personal—and learning how to get answers. She demonstrates how to live by faith while seeking greater light and knowledge. And she testifies of principles that are worth wrestling for and of understanding that can be gained in no other way. Available at Deseret Book stores and on deseretbook.com.