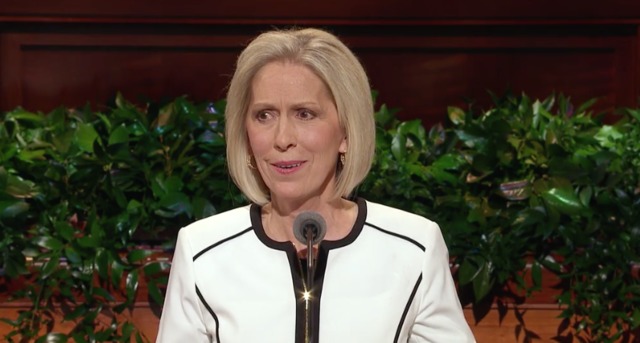 Sister Jones Shares Powerful Message About the Worth of a Soul, Heavenly Mother the Day After Her Son's Funeral

Sister Joy D. Jones delivered a powerful message on Saturday—sharing the infinite worth of the soul along with mention of Heavenly Mother—just one day after her son's funeral.

On September 13, 2017, Sister Jones's family experienced an intense loss when her son Trevor Jones passed away after a three-year battle with cancer.

The 39-year-old "loved to laugh and had an infectious sense of humor," had a love of mountain biking, and would often say that "when he got to his office after a ride, nothing he faced that day could be more difficult than the mountain he conquered that morning," according to his obituary.

On September 22, just one day before the general women's session of general conference, Sister Jones attended her son's funeral along with his wife and five children.

Standing in front of thousands at the Conference Center, Sister Jones delivered her powerful message to the women of the Church. Quoting Spencer W. Kimball, Sister Jones shared our infinite worth and how our Heavenly Father and Heavenly Mother see us as their sons and daughters:

"'God is your father, He loves you, He and your Mother in Heaven value you beyond any measure. You are unique, one of a kind, made of the eternal intelligence which gives you claim upon eternal life. Let there be no question in your mind about your value as an individual. The whole intent of the gospel plan is to provide an opportunity for each of you to reach your fullest potential, which is eternal progression and the possibility of godhood.'"

► You'll also like: 11 Powerful Truths About Our Heavenly Mother from Prophets and Apostles

Throughout her address, Sister Jones continued to address the worth of souls and our divine identity. And her irreplaceable message inspired many.

“Being sin-resistant doesn’t mean being sinless, but it does imply being continually repentant, vigilant, and valiant.”-JoyDJones | #LDSConf— Mormon Disciple (@RealDoctrine) April 2, 2017

"Truly knowing you are a daughter of God will affect every aspect of your life..." - Sister #JoyDJones#ldsconf— Paige (@pg_g) September 24, 2017

May we be able to remember these powerful messages from one of our strong Church leaders:

“Spiritual worth means to value ourselves the way Heavenly Father values us and not as the world values us. Our value was determined before we ever came to the earth.Worthiness is achieved through obedience. If we sin, we are less worthy, but we are never worth less.”

“Sisters, let us not be confused about who we are. While it is often easier to be spiritually passive than it is to put forth the spiritual effort to remember and embrace our divine identity, we cannot afford that indulgence in these latter days.”

We are grateful for Sister Jones message and our prayers and thoughts are with her and her family at this time.