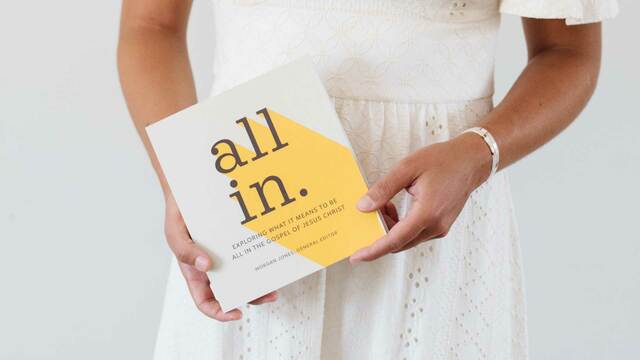 Erin Hallstrom, director of audience development: “We knew we wanted to do something special for our 100th episode. We dreamed big but kept experiencing roadblocks. During that time, we were given the opportunity to interview the whole Relief Society General Presidency, and all our struggles to fill that spot made sense—the 100th episode was always meant for them.”

Morgan Jones, host: “If I was asked to pick one episode to recommend to anyone regardless of their situation, regardless of whether they’re a member or not, the episode that I would always recommend is Marilee Killpack’s episode. I think that the parallel that she draws between her sons and the Savior and us is so powerful, and I think she did such a good job telling it, you would have to be completely heartless for that episode to not touch you.”

Derek Campbell, sound engineer: “The episode where the couple had both lost their spouses to suicide, Eric and Leslie Dyches. . . . I knew Leslie before. She used to be in my ward and I knew her [late] husband a little bit. . . . I got to sit in that interview and . . . it was just a very intimate moment and just powerful.  It hit a deep personal connection because I know what happened there. So out of all the interviews, that was the most spiritual one and one of the most heart-wrenching interviews. I remember sobbing quietly in the corner with my audio gear as I was listening. It was just a really sweet moment and I’ll love that family forever because of what they gave to me that day.”

KaRyn Lay, former media producer and manager: “When we were developing All In, we knew it had potential to do good things in the world, but I don’t think we really understood what that would look like until the podcast got into its groove. My favorite episode(s) are nine and ten, the episodes with Bruce and Marie Hafen, because it was at that moment that I saw the power that this kind of honest, relevant, and meaningful conversation, guided by the host’s curiosity and our guests’ expertly curated lived experiences, could have in the lives of Latter-day Saints. It has been so fun to cheer it on from the sidelines as it has taken off from there.”

Colin Rivera, former digital marketing manager: “I love all of the music episodes, especially the Steven Sharp Nelson episode. I have a music background—I studied music and worked as an independent musician for a number of years. For me, one of the ways that I feel closest to God is through music. I’m not a very verbally outspoken testifier when it comes to the Savior and the gospel; I prefer to let kind of music do that for me. So, I love listening to how other musicians relate to the experience of doing that.”

Kensie Smith, social reach and attribution manager, All In book designer: “First of all, I'm glad you asked for ‘one of my favorites’ because I could never choose one. But the live recording of Calee Reed’s episode was so special. I hope we can have a live event again sometime soon. I didn't know what topics and questions Morgan had prepared, but a chunk of the episode ended up being about Calee's mom passing away after a battle with cancer. The day we recorded was the fourth anniversary of when one of my roommates passed away from lymphoma and so there was an added layer of connection and meaning for me.”

Katie Lambert, podcast production specialist: “I’d have to say one episode that I have thought a lot about would be episode 102, ‘Chad Ford: Conflict—Something to Fear or Embrace.’ I love how he says . . . ‘I want to understand you and what makes you—you, and why that's so important to you. And I'm not going to demonize you, I'm not going to mistreat you, I'm not going to justify misbehavior toward you, I'm just going to see you. And what's so powerful about that move is it becomes a massive catalyst for the other person to turn to do the exact same thing back toward us.’ I love that. It’s helped me so much in my life as I’ve tried to understand people who are different from me and it’s given me new insight into why, as an epic conflict avoider, understanding conflict instead of running from it can help bring people closer together, which is so needed today. So if I had to pick, I’d say that one is my favorite.”

Erika Free, podcast production coordinator: “My favorite All In episode is probably the one with Anthony Sweat! (A very close win, I have so many favorites). I think it's my favorite episode because it embodies everything that I love about All In. It's real. The episode is unashamed to highlight conversations that can be difficult. And it's such a fun episode—both Morgan and Anthony have a great sense of humor—and most importantly, it showed me a perspective I had never thought about before that lingered in my thoughts for months after listening to it. It was just so interesting and so faithful, and I love that All In gives me the chance to eavesdrop on super cool conversations like that.”

Nathaniel Hjorth, social reach and attribution coordinator: “One of my favorite episodes is episode 80 with Dallas Jenkins. To be honest, I don't even watch The Chosen, but I loved his thought that members of the Church and Evangelicals love the same Jesus. I learned there’s a lot of power in joining with other religions and ideas rather than focusing on who is right. It's a small portion of the episode, but it always stuck with me.”