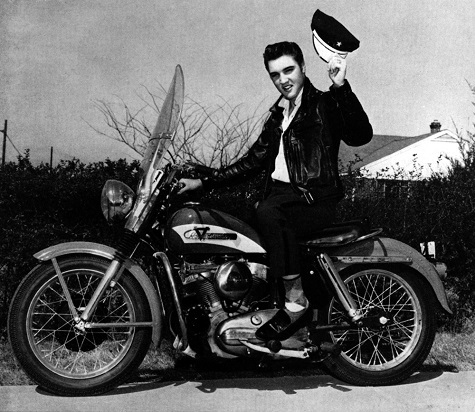 Elvis didn't relish his title of King. As he said, “there is only one King, and that is Jesus Christ."

Deeply religious and a heavy reader of spiritual topics, Elvis showed considerable interest in The Church of Jesus Christ of Latter-day Saints and maintained close connections with a few Latter-day Saints.

Elvis received a copy of the Book of Mormon from Olive Osmond—who gave copies of this sacred scripture to many famous people, including the Queen of England. Other fans have also claimed to have given him a copy.

While there is a Book of Mormon preserved in the historical collections of The Church of Jesus Christ of Latter-day Saints that reportedly belonged to Elvis and has many hand-written notations, scholars have discovered the book is likely a forgery.

However, former missionary Bobby Kauo claims that he taught Elvis missionary discussions while the King was filming Paradise, Hawaiian Style at the Polynesian Cultural Center.

Elvis’ good relationship with Latter-day Saints was due in large part to Latter-day Saint and martial arts expert Ed Parker, who Elvis referred to as "my second daddy," according to Parker's book Inside Elvis. In Paul Skousen's book Brother Paul’s Mormon Bathroom Reader, he tells of a day when Elvis reportedly attended seminary.

After training Elvis in self-defense, Parker became Elvis’ personal bodyguard for 12 years, according to The New York Times. Knowing Elvis’ affinity toward religion, Parker gave Elvis a series of Latter-day Saint books, one of which is still on display at Elvis’ Graceland home. Elvis read these books and asked Parker questions about his faith on limo drives to and from concerts (Brother Paul’s Mormon Bathroom Reader, Paul B. Skousen, 2005).

One night, after giving Parker a brand new Cadillac, Elvis drove with his bodyguard from Las Vegas to Pasadena. Elvis and Parker arrived in California early in the morning, and Parker invited Elvis to meet his two girls who were attending early-morning seminary (Brother Paul’s Mormon Bathroom Reader, Paul B. Skousen, 2005).

Elvis met with and embraced Parker’s daughters outside the seminary building. Then, he surprised everyone with his own request: could he speak with their whole seminary class? Elvis complimented these young, faithful Saints for taking the time to learn more about the one, true King and provided his own witness of the Savior, Jesus Christ (Brother Paul’s Mormon Bathroom Reader, Paul B. Skousen, 2005).

While Latter-day Saints like Olive Osmond and Parker influenced Elvis’ beliefs and understanding of the Church, Elvis also had a significant impact on the young members in Pasadena. After the early-morning witness Elvis gave during seminary, the attendance record for seminary classes remained at 100 percent for years, aided no doubt by rumors that Elvis might return for another visit (Brother Paul’s Mormon Bathroom Reader, Paul B. Skousen, 2005).

Parker chronicled his time with and observations of Elvis, as well as the King's views on religion, in his book Inside Elvis.

While many rumors circulate about Elvis and the Church, it is clear that Elvis associated with many Latter-day Saints and was a firm believer in Jesus Christ.