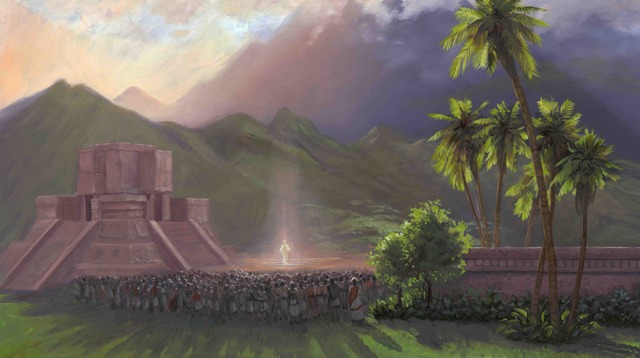 The Light of the World: Why this week's 'Come, Follow Me' reading is arguably the best part of the Book of Mormon

There was a lot of speculation leading up to President M. Russell Ballard’s visit to my mission. What was the Lord sending an Apostle to tell us or teach us? The visit came on the heels of the missionary age change and the number of missionaries serving was higher than ever. Maybe he was coming to tell us something we’d never heard before? Others felt certain he was coming to call some of us to repentance and to emphasize obedience. Instead, what did President Ballard do? He read from 3 Nephi 11 and 17. And while it wasn’t anything revolutionary, I remember sitting in that stake center in Richland, Washington, and feeling the Spirit say, “You know this is true. Never forget that.”

It might, at first, seem inappropriate to call any passage in the Book of Mormon “the best part” until you understand that 3 Nephi 11 is where Jesus finally enters into the story in person. But if we skip to chapter 11, we’d be getting ahead of ourselves this week.

The chapters from this week’s Come, Follow Me reading don’t begin in the happiest of circumstances as tremendous destruction signals the death of Christ. The earthquakes and fires may actually feel familiar, but then something happened that not even 2020 has brought with it: the world went dark. When I was on my mission, one of my companions, Sister Hailey Pierce, sent me an email and made a comment that I can honestly say changed my life. Perhaps it conveys something you have thought of many times but up until I read her email, I had never thought of light in quite this way. She wrote, “I was reading in Helaman 14 where Samuel is prophesying of the signs of the birth and death of Jesus Christ. The sign of His birth is three days of light and the sign of His death is three days of darkness. I have known that my whole life, but the symbolism of the light and darkness hit me really hard this week. The Light of the World came into the world with light and when He was taken the sun, moon and stars refused to give light to the world. They couldn't, because the Light of the World had been taken. Finally, light returned when He was resurrected! That is why we focus on the Resurrection and not the cross. We focus on the light rather than the darkness!”

This week, as you study these chapters I hope you will think about what it must have felt like to experience complete darkness and then to experience the joy that came when light, the Light of the World, returned. It is my belief that He can bring light into even the darkest spaces and the best parts of our stories will be the parts where He enters in.

On this week’s Sunday On Monday podcast, host Tammy Uzelac Hall was joined by Liz Hansen, the lead writer for the Church’s Book of Mormon videos. She revealed the challenges her team faced as they did the screenwriting for 3 Nephi 8.

“The hard thing about screenwriting, it’s kind of like writing a haiku. Because you can only write what can be filmed. So you can’t write anything that’s in the life of the mind because you can’t film it. You can film flashbacks, you can have voiceovers, which we do. But you can’t write anything that can’t be filmed so it’s really, really tough writing. And we’ve got these, what we call 'witness characters,' that are going to go through the entire season so we see everything through these people’s eyes and how it affects them, because remember it’s the righteous that were spared so seeing these people realize who they are and what is happening, and the faith that they’ve had through all these years is finally coming to fruition. And I don’t think they even realized what it was going to be until He appears there in chapter 11 and it’s just extraordinary.”

David Butler recently received a text from a friend who said that he was noticing a lot of signs of the Second Coming and was feeling a bit nervous. Butler encouraged him to read 3 Nephi 9 where, as Emily Belle Freeman says “He cuts right to the chase” of who He is, what He came to do, and what you can expect if you choose to come unto Him.

On this week’s episode of Don’t Miss This, Butler explains, “As you keep going through and read these you’ll just see in [verse] 15, He reminds you, ‘I’m the Creator of all of those things. I came with redemption in verse 17. I’m Light. I’ve come, in [verse] 21, to bring redemption to the world and to save the world. And in [verse] 22 . . . I have laid down my life.’ So anyone who gets nervous or misinterprets His character in what happened in chapter 8, they ought to come to chapter 9 and see, ‘Okay, there must be something that we’re not connecting if I’m nervous about Him.’”

Repent That I May Heal You

One of my favorite lines in these chapters is in 3 Nephi 9:13 where Christ says “Will ye not now return unto me, and repent of your sins, and be converted, that I may heal you?” (emphasis added). Elder Neil L. Andersen gave a fantastic talk based on this verse titled “Repent That I May Heal You.” Once again, it is important to understand who Christ is and what His motivation is. It can be easy to view repentance as a scary thing or something to be dreaded when, in reality, His desire is to heal us. Undoubtedly one of the most difficult parts of healing from sin is the challenge of forgiving ourselves, and Elder Andersen addresses this in his talk by sharing a story:

Sometimes we wonder why we remember our sins long after we have forsaken them. Why does the sadness for our mistakes at times continue following our repentance?

You will remember a tender story told by President James E. Faust. “As a small boy on the farm . . ., I remember my grandmother . . . cooking our delicious meals on a hot woodstove. When the wood box next to the stove became empty, Grandmother would silently pick up the box, go out to refill it from the pile of cedar wood outside, and bring the heavily laden box back into the house.”

President Faust’s voice then filled with emotion as he continued: “I was so insensitive . . . I sat there and let my beloved grandmother refill the kitchen wood box. I feel ashamed of myself and have regretted my [sin of] omission for all of my life. I hope someday to ask for her forgiveness.”

More than 65 years had passed. If President Faust still remembered and regretted not helping his grandmother after all those years, should we be surprised with some of the things we still remember and regret?

The scriptures do not say that we will forget our forsaken sins in mortality. Rather, they declare that the Lord will forget.

We read in 3 Nephi 11 that the voice of God was heard from heaven three times before it was understood. On Sunday evening, Elder Ronald A. Rasband was joined by his wife, Sister Melanie Rasband, in speaking to young adults during Sunday's Face to Face event. Sister Rasband shared the following about when she heard a voice three times in response to a question regarding how we can recognize the voice of the Lord:

Sometimes we actually hear words and we mistakenly think it’s our own thoughts and feelings that we’re hearing. I learned this when I was a teenager and I had to cross a road during a blizzard snowstorm. I’d put my backpack up to the side of my face to block the snow. I took a couple steps into the road and heard, “Turn around and go back.” Well of course, I just thought, “That’s weird.” And so [I took] a couple more steps and I heard, “Turn around and go back.” But this time I argued. I said . . . “But I have to cross the road to catch the school bus.” There was just another step forward and I heard an emphatic “Run!” That’s when I knew the Holy Ghost was speaking to me and before I could pick up my feet and run, a car hit me on my side. I flipped over the hood, hit the windshield and fell down to the ground. And I knew, and I promised after that, the Lord would never have to have the Holy Ghost tell me something three times before I responded. I think it’s an important thing to be able to learn how to hear the Holy Ghost for yourself. Now, the Nephites had a similar experience where they heard a voice and they didn’t know where it was coming from, or from whom. But listen to what they did to better hear the voice of the Lord. From 3 Nephi 11:5, we read, “And again the third time they did hear the voice, and did open their ears to hear it; and their eyes were towards the sound thereof; and they did look steadfastly towards heaven, from whence the sound came.” I invite each one of you to look steadfastly always toward heaven with a willing heart and ears open to hear Him.

In what is perhaps one of the most beautiful passages of scripture, we read that the Savior ministered to the Nephites “one by one” until “all” had gone forth. On his Unshaken YouTube series, Jared Halverson spoke of the significance of this one by one ministry.