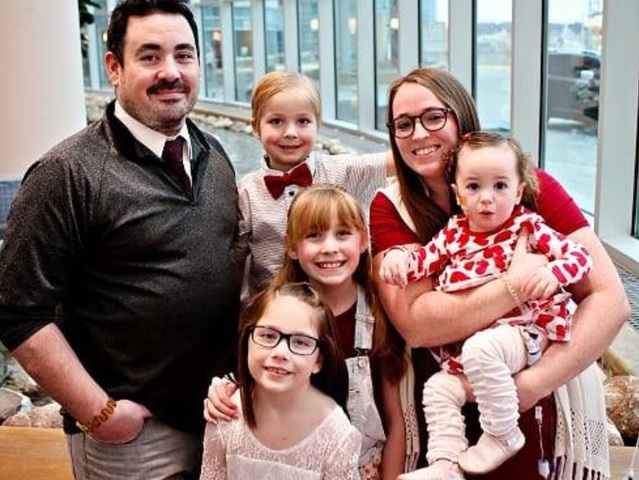 Weeks after her first birthday, Mazlowe Ard started breathing quickly, her appetite decreased, and she grew lethargic. The Ards noticed their daughter's sudden change and took her to urgent care, where doctors passed off the symptoms as teething.

When Mazlowe didn't improve after days, her mother, Brittany, took Mazlowe to the pediatrician. "I thought I would be back in an hour with some medications to fix whatever was going on with my baby girl," Brittany wrote on Romper. But the visit quickly turned into a parent's worst nightmare and Brittany and Mazlowe found themselves in the emergency room, where Brittany learned that Mazlowe had a serious heart condition. The doctor explained that Mazlowe was "in heart failure and she was going to need immediate hospitalization," Brittany wrote. "He went on to say she had a one-in-three chance of surviving."

After a 28-day stay in the Pediatric Intensive Care Unit and weeks of medication and at-home care, the Ards found themselves back in the hospital, where they learned that Mazlowe's only chance of surviving is receiving a heart transplant.

"It almost feels wrong waiting for another young child to pass away so that my daughter can have a second chance at her own life," Brittany wrote. "I already ache and have cried many tears for the unknown family who will unselfishly donate their child’s organs so that my child and others may live. Even though I don’t know who they are, I pray for them as we wait. . . . I’ve felt a lot of sadness and guilt when it comes to using another child’s heart to replace my daughter’s broken one. But I have to remind myself that my daughter isn’t taking anyone’s life. Her donor’s family will choose organ donation. And because of their loving and thoughtful decision, my daughter will be given the most precious gift anyone could receive. The gift of life."

Though the Ards have spent months in the hospital waiting for Mazlowe to receive a heart, Brittany chooses to focus on joy whenever possible. "I’ve found that it makes the days more bearable when I count my blessings and have an attitude of gratitude," Brittany wrote. "Hardships don’t mean we have to be miserable until they’re over. . . . It can often feel like our trial will never end, but I remind myself that it’s just temporary in the grand scheme of things, and I look forward to the day when this is all a distant memory. Until then, I’m choosing joy."

One such moment of joy came this March when Mazlowe's older sister turned 8. A Facebook post from Children's Hospital and Medical Center explains:

"Mazlowe has been in our Intensive Care Unit for months. In her family’s faith tradition, 8 years old is a key time of spiritual commitment, marked by baptism by immersion. Mazlowe’s older sister was approaching baptism, and their parents wished to have the whole family together for the event. Could the baptism be at Children’s? Our team said YES, coordinating the event, purchasing a small swimming pool & hosting a reception. Mom, Brittany, says: 'I’m still in awe. Thank you for being excited for us & allowing us to be together for this special milestone.' We applaud each and every team member who went above & beyond, and we celebrate alongside this beautiful family!"