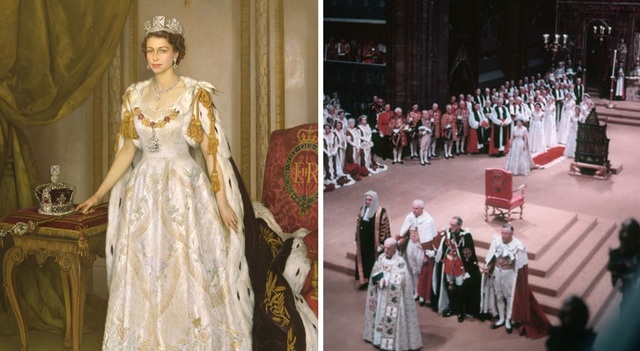 What a Queen's Coronation Can Teach Us About Divine Worth, Loving One Another

byGanel-Lyn Condie, excerpted from "You Are More Than Enough: You Are Magnificent" | Jan. 01, 2020

I stood outside of Buckingham Palace in April 2017, and it was spectacular. The day was filled with pageantry and spectacle as thousands gathered to celebrate Queen Elizabeth II’s ninety-first birthday. My daughter, Brooklyn, and I just happened to be in London that day and thought we would make our way over to the palace to witness this special changing of the guard and birthday festivity.

Buckingham Palace functions as both a working and living center for the monarch. The pomp and circumstance of the royal family is quite intriguing, especially to an average American like me. Before leaving on our trip, I did some research on the history and role of the queen, and I learned some fascinating things.

For example, in September 2015, the queen became the longest-reigning British monarch in history. But what intrigued me the most was reading about the process of coronation. The ceremony and ritual has its roots in biblical times. According to the great source of all knowledge, Wikipedia, “the essential elements of the coronation have remained largely unchanged for the past thousand years. The sovereign is first presented to, and acclaimed by, the people. He or she then swears an oath to uphold the law and the Church. Following that, the monarch is anointed with holy oil, invested with regalia, and crowned, before receiving the homage of his or her subjects. Wives of kings are then anointed and crowned as queen consort.”

A new queen swears an oath, is anointed with holy oil, is dressed in a robe, and is given a crown. Coronations have been held in Westminster Abbey, a place of sacred worship, and it’s all done in front of witnesses. How familiar this all sounds, especially for those members of the Church who have received their own temple endowments.

Before a queen is crowned, she is a princess. She knows the potential of becoming queen simply because of the family into which she is born. Royalty take special care in the schooling and raising of their offspring because it’s possible they will someday rule a country. Lines of succession are almost as complicated as Los Angeles freeways. If a person is born a royal, their growing up and social connections are scrutinized and supervised. There is much at stake.

For Queen Elizabeth, life dramatically changed in 1936 when her uncle abdicated the throne, making her father the new rightful king of England. Now the pressure was on. Who would she marry? What would she study? Then, more than sixty years ago, her father—King George VI—died. At the tender age of twenty-five, Elizabeth became the queen. I wonder what was going through her mind. She had lost her beloved father. She had never asked to be queen; nevertheless, she moved forward with her coronation ceremony. It was time to act like a queen.

Why this walkthrough English history? (I hope it is a bit obvious.) When Queen Elizabeth was only ten, her father became king. Who she married mattered. And what she did on Saturday nights mattered. What she ate and what she wore mattered—people watched her. She was a princess and would one day be crowned and anointed the Queen of England. Pretty big deal.

That Crown Makes You Look Fabulous

Because of my research, I know quite a bit about Queen Elizabeth. But guess what? I also know something about you. Just like young Elizabeth, you are also a princess. Your Father is the King. Maybe you already knew that, but maybe you have forgotten. It is the truth. You are the daughter of the Most High God. That means something, you know? That means you are destined—by birth—to be a queen.

You and I have something in common. I am also a child of God. We have the same Dad. That means we are both enrolled in the Making of a Queen program here on earth. I know our circumstances may be different. You were a cheerleader in high school. Me, not so much. Or you love sewing and crafts, while others of us love sports or reading. Maybe you are one of my sisters who lives on the other side of the world in the Middle East. If so, you may already be used to wearing a crown—a hijab. No matter what our differences, we have one thing in common: we are sisters who have the same Heavenly Father and Mother.

This concept reminds me of a story. Once there was a king with a horrible town in his kingdom. It was a complete dump! The schools were horrible. The crime was high. There was garbage all over the streets. Neighbors didn’t trust one another. It wasn’t a great place to live. One day, the king sent out a proclamation. He placed his newborn child in the town to be raised and cared for by a village family. No one was to know which home housed the royal baby. Great excitement spread throughout the land. The king had picked their town to care for and raise the next king or queen.

The people made plans to clean up the streets. Townspeople took turns patrolling the village to control the crime. They repaired schools and donated new books to the library. Within a fewyears, the town was completely transformed. The people were happy. Their homes were clean, and flowers grew in the windowsills. The village park became a gathering place for festivals and holiday celebrations. There was no safer place to raise children. But the biggest change was in how the adults treated the young ones. No longer were kids dismissed as annoyances or chased away from storefronts. The offspring of this town were celebrated and adored. Patience was extended to juvenile misdeeds, and the children grew up to be strong, smart, and happy. Young people from every family were treated with dignity because no one knew who the true royal child was.

Eighteen years passed. The king sent a proclamation saying the day had come to reveal who the prince or princess was. As the king entered the town square, trumpets played and banners hanging from the rooftops billowed in the breeze. The excited crowd quieted as parents held their children close. The king stood before the big reveal.

“Eighteen years ago, I said my newborn child had been placed in the care of one family in your town. No one knew which home had been picked. I am here to expose the identity of your future king or queen.” As the listeners waited for the anticipated news, there was complete silence. Then the king continued. “The truth is, all of the children in this town are my children. They are all of royal birth. They all matter. Thank you for treating these youth with such concern. Your schools have become the best in the land. Now everyone wants his child to be educated here. Your village is the cleanest and safest for hundreds of miles. Thank you for doing such a beautiful job of raising the future monarch.”

These fictional villagers teach us truth. How we treat each other makes a difference. The town streets weren’t just cleaned up; the people were transformed. The children became something grander because of the love and care the adults gave them. The whole town changed—not because they had more money or time but because of who they believed lived among them. Their priority and focus changed. Royalty resulted from the respect shown.

Joseph Smith said, “It is the first principle of the Gospel to know for a certainty the Character of God,” because if one doesn’t understand the character of God, “they do not comprehend their own character.” When we know whose we are, we start to understand who we are. As a child of the King, we begin to understand that we have inherited divine qualities from our Heavenly Parents. Their greatness resides in us. We are precious in Their sight.

Much like the king from the parable, Father has sent us to earth to grow, learn, and live among imperfect villagers. All children are raised by flawed parents. Many are born in less-than-ideal circumstances. The key is not just surviving: you must stay focused as you grow up to be queen! Know who you really are, and don’t be distracted by your shabby palace or tarnished tiara. Ralph Waldo Emerson wrote, “What lies behind us and what lies before us are tiny matters compared to what lies within us.” What lies within us came with us. Everything we need to fulfill our missions on earth, to succeed in the roles given, was interwoven in the fibers of our spirits.

In the parable, the older children probably remembered what things used to be like. They were the kids who had been ignored and mistreated. What must it have felt like to see things change and to watch the younger generation grow up with the advantages they’d never had? Many of us can recall painful experiences and traumatic events that made us think we were less-than. It is for this reason that our Father, the King, provided us with the best older Brother in the universe—a Savior who could rescue us from the dirty villages, disgruntled parents, and disenchanted teachers who may have misshaped our queenly training program otherwise. Just like the changes that eventually came to the families of the town, we too will witness miracles and transformations of our scars. For Jesus came to wipe our tears and heal our hurts: “And God shall wipe away all tears from their eyes; and there shall be no more death, neither sorrow, nor crying, neither shall there be any more pain: for the former things are passed away.”

Christ wore a crown of thorns so you and I can someday wear a crown of jewels. He promised to be there for the whole queenly prepping process. He will stand as a witness to our transformations. He is rejoicing in our successes and mourning our losses. He is counting all we do toward our ultimate growth and good. It is tough being queen, so God is making sure we get all the courses we need to wear our perfectly fitted crown in eternity. 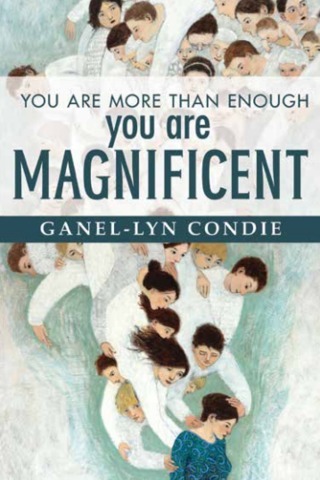 In a world where many women wonder if they measure up, the quest for perfection can be exhausting! For those who are overloaded and overwhelmed by feelings of inadequacy comes an authentic and powerful lifeline of reassurance by best-selling author and popular motivational speaker Ganel-Lyn Condie. Featuring lessons taught through scripture, Church leaders, and personal experience, this inspirational book highlights the eternal strength inherent in and available to every woman. Readers will laugh, cry, and feel supported as they live their earthly missions with renewed peace and confidence. From the innate beauty of daughters of God to the gift of self-acceptance to the transcendent power of Christ’s grace, sisters in every stage of life will be inspired to live more freely and fearlessly by learning to embrace their eternal potential and realize they are already more than enough—they are magnificent.