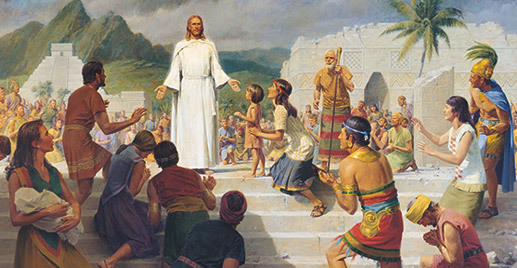 Since the translation of the Book of Mormon, members of the Church and critics alike have speculated about the geography of the events detailed within its pages. Where did the Nephites and Lamanites land on the American continents? Where did they live, thrive, and battle in a generations-long war that ended in the genocide of the Nephites? Often these debates lead to more than speculation and can cause contention among members of the Church.

In the Gospel Topics section of lds.org, the Church published this emphatic statement:

Though the exact location of the Book of Mormon remains a mystery, the geography recorded in this sacred record can teach us much about the Jaredites and descendants of Lehi who were guided by God to the Americas. "This history contains information about the places they lived, including descriptions of landforms, natural features, and the distances and cardinal directions between important points," the Gospel Topic states. "The internal consistency of these descriptions is one of the striking features of the Book of Mormon."

The article also addresses moments in our Church history when Church leaders, such as Joseph Smith, made comments about Book of Mormon lands. The wording of the article is careful and precise, noting these were Joseph Smith's feelings, not official Church statements:

"The Prophet Joseph Smith himself accepted what he felt was evidence of Book of Mormon civilizations in both North America and Central America. While traveling with Zion’s Camp in 1834, Joseph wrote to his wife Emma that they were 'wandering over the plains of the Nephites, recounting occasionally the history of the Book of Mormon, roving over the mounds of that once beloved people of the Lord, picking up their skulls and their bones, as a proof of its divine authenticity.'"

Another documented example from Zion's Camp comes from several men who recalled Joseph Smith identifying the bones of a Lamanite warrior named Zelph, who had died in battle. But, given the lack of context of these accounts, this experience cannot be given as proof of the Book of Mormon's geography. (Read more about that here.)

About such speculation, our prophet spoke powerfully on the topic by relating an experience he had with President Ezra Taft Benson:

"Not long after my call to serve as one of the Twelve Apostles, I was summoned to the office of the President of our Quorum, President Ezra Taft Benson. He expressed deep concern that members of the Church did not fully appreciate the value of the Book of Mormon. With emotion in his voice, he read to me from the eighty-fourth section of the Doctrine and Covenants:

"'Your minds in times past have been darkened because of unbelief, and because you have treated lightly the things you have received—

"'Which vanity and unbelief have brought the whole church under condemnation' (Doctrine and Covenants 84:54–55).

"By that time, President Benson had completely captured my attention. He then concluded his admonition:

"'And they shall remain under this condemnation until they repent and remember the new covenant, even the Book of Mormon' (Doctrine and Covenants 84:57).

"I shall never forget that lesson. Since then, . . . many other leaders of the Church have continued to extol the Book of Mormon to people throughout the world.

"I would like to add my testimony of the divinity of this book. I have read it many times. I have also read much that has been written about it. Some authors have focused upon its stories, its people, or its vignettes of history. Others have been intrigued by its language structure or its records of weapons, geography, animal life, techniques of building, or systems of weights and measures.

"Interesting as these matters may be, study of the Book of Mormon is most rewarding when one focuses on its primary purpose—to testify of Jesus Christ. By comparison, all other issues are incidental.

"When you read the Book of Mormon, concentrate on the principal figure in the book—from its first chapter to the last—the Lord Jesus Christ, Son of the Living God. And look for a second undergirding theme: God will keep His covenants with the remnants of the house of Israel" (“A Testimony of the Book of Mormon,” Ensign, November 1999).

So whatever on side of the debate you might land, remember what is most important is that the Book of Mormon stands as another testament of Jesus Christ—a truth that should unite us as Latter-day Saints.