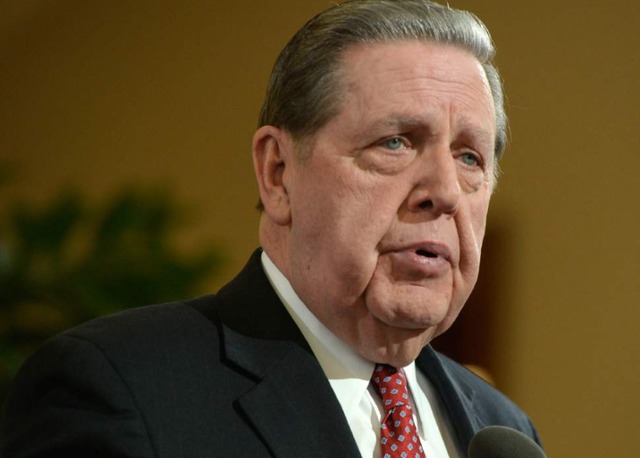 Elder Jeffrey R. Holland is known for his talks and the powerful principles and crisp, undeniable doctrine.

But for residents of Hiko, Nevada, nothing Elder Holland says inside the Conference Center could have a greater impact than what they witnessed nearly 20 years ago. It's a story they recall often, like a sacred memento you would never hide in a box.

The experience begins in an apartment building in Russia.

Where does it end? In a rocky grave in Nevada.

On Saturday, October 17, 1998, Elder Jose Mackintosh, 20, of Hiko and his companion, Elder Bradley Borden, also 20, of Mesa, Arizona, were violently attacked while leaving an evening appointment in Ufa, Russia. The stabbings seriously injured 20-year-old Elder Borden and he was sent to recover at a hospital in Germany.

Elder Mackintosh died at the scene.

Word traveled fast to the tiny town of Hiko and by Sunday afternoon, a joint sacrament service was scheduled between the two local wards and Elder Holland was assigned to visit, preside, and give comfort.

One week later, Elder Holland was back for the funeral.

Just 12 hours before Elder Mackintosh would be eulogized and laid to rest, friends gathered at Schofield Cemetery in Hiko to finish digging the grave. The ground had proved too tough for the backhoe to finish the job and much of the work needed to be completed with shovels, steel bars, and pickaxes.

As evening fell, a car entered the cemetery and rolled to a quiet stop. A man stepped out by himself and took off his suit coat. His white shirt and tie drew a memorable contrast with the dusty Nevada dusk.

“May I help?” the man asked and the crew was speechless. The volunteer was Elder Holland.

As he hopped into the deep grave he asked, “Could anyone lend me a shovel?” Then, with heavy hearts and with dirt and grief on their faces, they dug.

Cortney Dahl, a local priesthood leader and close friend of the Mackintosh family, recalled in an interview this week that it's as if the scene occurred yesterday and not two decades ago.

“I remember how shiny his shoes were standing in the grave and the reflection of the shovel. How his sleeves were rolled up. How he sweated like the rest of us.”

Elder Holland, with seemingly ninety and nine reasons to leave early, stayed for the one until the work was done.

The funeral was a standing-room-only affair. Dahl recounts people sitting all the way back on the stage in the cultural hall and still others standing on the edges. Elder Holland and Elder Mackintosh’s family spoke fondly about the marvelous missionary who’d dreamt of serving in Russia since childhood.

After the service, and with the longest funeral procession Dahl has ever seen, Elder Holland returned to the grave he’d help dig. When the dedication and burial were complete, Elder Holland stayed and shook the hand of every single guest.

Later, Dahl learned that Elder Holland had driven his own car to Hiko both times so he'd have the flexibility to stay as long as necessary. "I can still feel the brotherly love that he sincerely felt for each of us as he participated in that Christ-like service. There wasn't a doubt among us that he was a chosen servant and personal witness for Jesus Christ."

Dahl still ponders how embarrassed this Apostle of the Lord seemed by all the attention. “He knew the weekend wasn’t about him; it was about Jose and his family, but he also knew he had a responsibility to mourn with those who mourned.”

This weekend, witnesses to that special week in Hiko, Nevada, will smile when Elder Jeffrey R. Holland steps to the pulpit to address a global audience.

Millions will see him in a clean dark suit with bright eyes and a beautiful tie.

But a small band of brothers will see him differently. In their minds, this disciple's sleeves are rolled up, the sun is setting on his face, and he’s literally up to his chest in dirt and service.

Whatever Elder Holland teaches will be powerful and poignant. But for Dahl and all those who lived through another October weekend, they already know the most important lessons and examples don't always come from a pulpit.