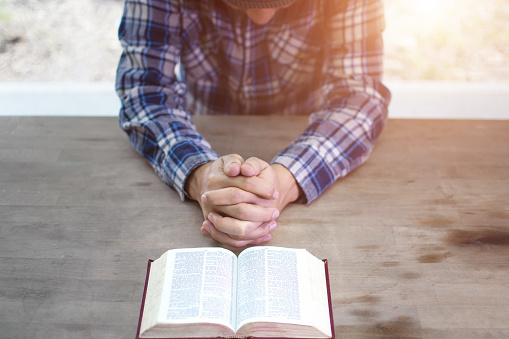 When I was fourteen, I decided it was time I received my own testimony of the Book of Mormon. I began to read it, but as I read, I was filled with doubt about its truthfulness. I was frightened by my feelings, but I shared them with no one. One day after a particularly distressing day of reading, I decided to go into the willows by the river and pray until God gave me an answer. I begged God to take away the dark feelings and tell me if the Book of Mormon was true. “If you are really there and you love me, you will tell me,” I prayed. For hours I stayed in the willows. Night came on, and yet I continued to pray. This had worked for Enos, so I prayed and prayed. Finally, hungry and cold, I left the willows and went to bed. I heard no voice. I felt no lightening of my load. I received no witness, no calm burning in the heart. I had demanded an answer on my terms, according to my time line, corresponding to my needs. I had jumped from the pinnacle.

► You'll also like: The Powerful Book of Mormon Phrase We Always See but Never Think About

Satan did not take Jesus to the pinnacle; the Spirit did. Neither did Satan take me into the willows. But the opportunity to turn away a soul was present. “God does not answer you because he is not listening to you, because you are not important to him,” he whispered. This was a more powerful temptation at that time than, “God does not answer you because the Book of Mormon is false.” Happily for me, there were enough previous witnesses to a Father in Heaven's love to counter the doubts. And my mother's faith in the Book of Mormon sustained me during the next years.

► You'll also like: 19 Famous People Who Have Been Given a Book of Mormon

Please understand: It was right that I desired an answer. It was right that I prayed for it. It was right that I believed the promise God gave that He would grant me an answer. It was wrong to use the answer as a proof of His love. It was wrong in not allowing the Lord to choose His own time, place, and means for responding to my needs according to His wisdom. In all of the examples above, the prayers were right and proper; the danger of blinding mists comes in using the answers to those prayers as a test of God. There is a fine line between standing on the pinnacle with needing to jump to prove God's love and trusting that God will keep His promises without our making that fateful leap. We must say with Nephi, “I know that he loveth his children; nevertheless, I do not know the meaning of all things.” (1 Nephi 11:17.) There may be times when we will fall from the pinnacle and God will need to catch us. There may be times when He will ask us in full faith to jump. But it is God's place to bring us to those moments, not ours. There may be times when He specifically asks us to “prove me now herewith” (Malachi 3:10), but those invitations are His to offer, not ours to demand.

Eventually I received my answer, and in a way and time that were far more powerful than I could ever have expected. God did not let my foot dash against the stone. I did not remain in doubt and darkness regarding the Book of Mormon. When we need water from the rock, we may ask for it, but we must not require that water as a proof of God's power or love, for then we are standing on the pinnacle responding to the tempter's voice that we must jump or forever remain in doubt. Can we not believe, as did Jesus, without casting ourselves down?

In Lehi's dream, "numberless concourses of people' pressed forward toward the tree whose fruit would 'make one happy." (1 Nephi 8:21, 10.) But as they traveled, "there arose a mist of darkness ... insomuch that they who had commenced in the path did lose their way, that they wandered off and were lost." (V. 23.)

In Don't Leap with the Sheep, author S. Michael Wilcox identifies more than 25 "mists" that Satan uses to ensnare us — mists we can avoid if we're aware of them. Each mist is illustrated with a memorable story from the scriptures or from Brother Wilcox's life.