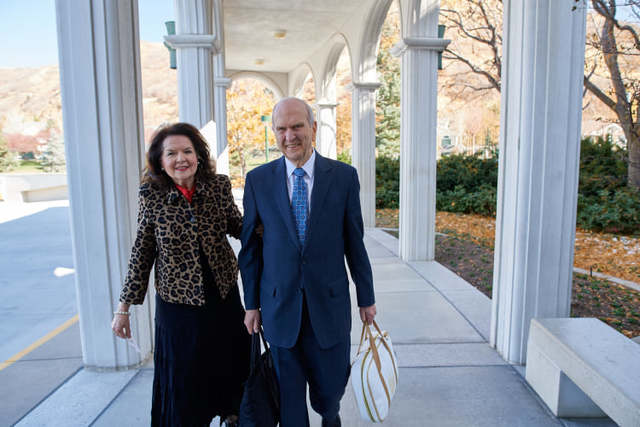 When the new year started with a prophet's call

This excerpt originally ran on LDS Living in January 2020.

Tuesday, January 2, 2018, started out as a tender but wonderful day for my husband and me. In the morning, I spoke at the funeral of one of our dear friends. She was 100 years old and had remained vibrant and steadfast in the gospel of Jesus Christ to the end! As his meetings for the new year had not yet commenced, my husband accompanied me to the funeral. Afterward, we attended the temple.

We rounded out our day with a little shopping, worked at home on several time-sensitive projects for the new year, and then called it a day and went to bed early.

At 11:01 p.m., we were awakened by a phone call telling us of the passing of President Thomas S. Monson. We were stunned!

My husband and I talked for quite a while, made a few phone calls, and then turned out the lights.

As I stared out into the dark of the night and into our future, the hymn that came to my mind was, “Where Can I Turn for Peace?” And I have to confess that—just for a moment—my mind raced straight to the line, “Where can I run?” (In that moment I had such empathy for Jonah!)

► You may also like: Watch: The Moment Sister Wendy Nelson Gained a Witness of Her Husband's Calling

On March 31, 2018, I wondered how I would feel as I gathered with 21,000 Saints in the Conference Center in Salt Lake City for the solemn assembly in which my husband would be sustained as President of the Church. I was prepared to feel a little anxious, but instead, I felt something I never expected: an overwhelming feeling of peace. I felt like I was actually immersed in peace.

The peace I experienced the morning of the solemn assembly was not of this world. It was provided by the Prince of Peace, Jesus the Christ. I personally experienced the Savior’s promise: “Peace I leave with you, my peace I give unto you” (John 14:27).

Right from the beginning, only the Lord could help my husband and me deal with many new things. Some things changed immediately: our ability to come and go as we had all of our lives ceased, our calendaring became more complicated, our visibility increased, and our privacy decreased dramatically.

Other changes, however, were more meaningful and important. There is an old saying that “the wife is the last to know.” In the case of President Nelson’s becoming the Lord’s prophet to the world, I will be eternally grateful that the Lord intervened so that I was not the last to know.

Just two days after President Monson departed from this mortal life, the Lord gave me a unique, most distinctive experience with my husband to let me know that the mantle of prophet was upon him. It was so vivid, so clear, so real! Every detail of that experience was seared into my mind and heart.

Then, two days later, the Lord gave me exactly the same experience again. That experience—repeated twice—is too sacred for me to share, but it is one that I can neither forget nor deny.

Because of that sacred experience, repeated twice,1  I can take any witness stand in any nation on earth to testify that I know President Russell Marion Nelson has been called by God to be the living prophet of the Lord on the earth today.

1. Actually it was repeated a third time several months later as my husband and I were reviewing an important document together.

“All I have witnessed, all I have experienced tells me that our Father wants to communicate with each one of His children and will do so commensurate with our desire and earnest seeking,” writes Sister Nelson. This remarkable book will help readers learn how to open that door. Available now at Deseret Book stores and deseretbook.com.