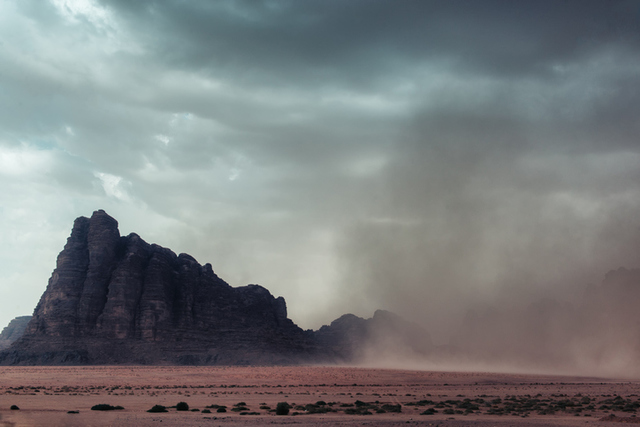 Why Does the Book of Mormon Reference an Ominous "East Wind"?

At least 20 references to a powerful and destructive “east wind” occur in the Old Testament (e.g., at Genesis 41:6, Exodus 10:13, Jeremiah 18:17 and Ezekiel 17:10, and Hosea 13:15). Such references reflect conditions in the Palestinian home of the biblical authors. Unlike the moisture-laden west wind from the Mediterranean Sea, the east wind, originating in the Arabian desert, is dry and desiccating.

The east wind shows up twice in the Book of Mormon, with exactly the same negative connotation:

“If my people shall sow filthiness they shall reap the east wind, which bringeth immediate destruction.” (Mosiah 7:31)

“And it shall come to pass that I will send forth hail among them, and it shall smite them; and they shall also be smitten with the east wind; and insects shall pester their land also, and devour their grain.” (Mosiah 12:6)

But is it plausible that a people thousands of miles and more than four centuries removed from their ancestral Near Eastern home would still remember a specifically Palestinian weather pattern?

One possible explanation for the presence of the two passages cited above would be, simply, that the Prophet Joseph Smith or some unidentified other modern author was borrowing from the Bible. That’s conceivable. But the young Joseph Smith wasn’t closely acquainted with the Old Testament, and no good evidence exists to suggest any another modern author.

Let’s consider a couple of other options, though, with the help of the linguistic and cultural data discussed in a recent article by the BYU Mayanist Kerry Hull titled “An ‘East Wind’: Old and New World Perspectives.”

Even in the Bible, the term “east wind” sometimes occurs without actually being associated with any particular direction. In such cases, it effectively “becomes the usual name of every wind that burn(s) up vegetation” and then, by extension, “the proverbial name for whatever is hateful or disagreeable.”

The story of Pharaoh’s dream of seven thin ears of corn that are “blasted with the east wind” (Genesis 41:6) is obviously set in Egypt, where the east wind is actually “soft, favourable, and wholesome.” In the Nile Valley, it is the south or southeast wind that parches. Perhaps in this case, therefore, the “east wind” is merely an inherited metaphor.

However, this need not be the case in the Book of Mormon.

Says Hull, “there does exist a considerable body of evidence that numerous pre-Columbian and modern inhabitants of Mesoamerica indeed viewed the east wind negatively and as a destructive force. Winds throughout Mesoamerica are the quintessential evil force, and so any reference to malevolent or destructive winds would have been readily understood.”

But the east wind, in particular, was often regarded as a bringer of misfortune, pestilent, dangerous, hot and desiccating, and “preeminent among the other winds.” Sometimes, too, it was associated with heavy rains and flooding, probably related to the arrival of Atlantic hurricanes from the east.

Among the Lacandon Maya, Hull reports, the wind gods, along with an earthquake, will be “the means of the final destruction at the end of the world.” (It’s difficult, in this context, not to think of the New World “storm,” “tempest,” “whirlwind,” and earthquake that are recorded in 3 Nephi 8 in connection with Jesus Christ’s crucifixion and death far across the sea.) “The wind in charge among this pantheon is the east wind,” writes Hull. And one Mayan term that seems to be associated with the east means, literally, “wind storm with earthquakes.”

Curiously too, the Maya of the Yucatan worshiped the tapir, a large herbivorous local mammal, in the form of an idol known as “Lord of the East Wind” and celebrated that idol every four years with the staging of sham battles.

Thus, there is absolutely no problem with the use of “east wind” in an authentically ancient Book of Mormon. It may be simply an inherited metaphor, an allusion to Old Testament usage preserved in the brass plates brought by Lehi to the New World, or a reflection of negative associations with the east wind in Pre-Columbian Mesoamerica itself. Any of these possibilities, or some combination of them, would account for the references in the book of Mosiah. “Mentions of a punitive east wind” are, summarizes Hull, “fully intelligible in a New World setting.”