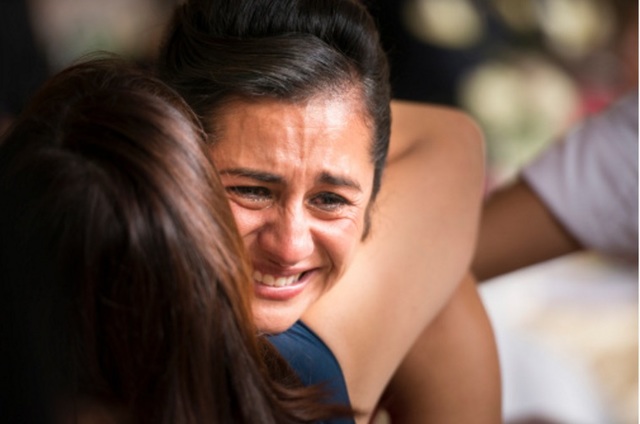 We all have bad days.

I’m not just talking about days when your favorite sports team loses or when the kids have a minor tantrum after you walk past the candy aisle in the grocery store. I’m talking about those days when the best thing that happens is the tantrum in the candy aisle followed by a full-blown in-store meltdown. The two oldest children are fighting, the baby is screaming, and the toddler breaks loose and runs through the parking lot with a loaded diaper. The drive home is full of yelling and crying followed by the bottom falling out of one of the grocery bags during unloading. The day is capped off by trying to put all the kids to bed at 6:30 p.m. (even though it won’t be dark until nine). I’m talking about those days when your dinner consists of a tear-filled bowl of ice cream and dessert is polishing off the remaining half gallon.

Then there are other times when such “bad days” seem like nothing compared to serious life challenges. We hear of friends losing their jobs or getting diagnosed with some dread disease. For individuals who face such difficulties, “bad days” often turn into bad weeks and bad years, with no apparent hope on the horizon. We feel badly for them yet are secretly grateful our lives do not consist of such chronic difficulties. We feel blessed to not have such trials. These experiences naturally invite the question, “Why do some people have serious challenges while others do not?” I admit, there are times in life when my answer to that question has been, “Well, perhaps they were not keeping the commandments like they should have.” I think we sometimes believe we have successfully avoided these types of challenges due to good behavior on our part. We may believe that if we are just righteous enough and keep the commandments, we will not have to pass through serious consequences.

At times we may look at those who have major challenges in life and think, I wonder what they did, or perhaps didn’t do, in order to run into such difficulties? We create fictions in our minds to explain to ourselves why God did not intervene and protect them against those hardships. Were they lacking in faith? Were they untrue to their covenants? Perhaps there were so many sins of omission that simply piled up to the point where God could not deliver these people from the consequences? Jesus’s disciples of old had the same question. In their travels, they encountered a man who had been born blind. “And his disciples asked him, saying, Master, who did sin, this man, or his parents, that he was born blind? Jesus answered, Neither hath this man sinned, nor his parents: but that the works of God should be made manifest in him” (John 9:2–3). This man’s trial was apparently in place so that Jesus could heal him; it had nothing to do with any sinful or neglectful behavior on the part of the man or his parents.

Sometimes we believe that consistent obedience to the commandments is some sort of protective guarantee against chronic hardship. I’m not sure why we think this at times, but I believe it may have to do with a desire for control and a fear of failure. We want to hedge our bets to ensure we will not have serious trials, and we somehow believe that obedience to gospel principles will create such a buffer. Even though I have had this belief at times, it has not held true in my own experience. Furthermore, I have not found it to be accurate in the lives of my friends. I have not found it to be accurate in the stories told of prophets and other faithful saints. For generations, prophets have taught we will be blessed if we will keep the commandments. That is completely true. However, being “blessed” does not always mean what we think it means. It does not always mean things go smoothly. Following are a few examples of individuals who were extremely righteous yet were faced with tremendous personal challenges.

Eve: A woman so righteous she was chosen to be the mother of the human race. One of her children was so wicked that not only did he murder his brother but he also consistently chose evil over good and was eventually doomed to wander the earth as a vagabond (see Moses 5:36–39).

Lehi: A prophet of God, chosen to escape the destruction of Jerusalem and take his family to inherit a land of promise. Two of his children were “murderers in [their] hearts” (1 Nephi 17:44) who tried to kill their brother on multiple occasions and ended up establishing a nation that was spiritually challenged for generations.

Sarah: Married to Father Abraham, who was foreordained to be one of God’s leaders (see Abraham 3:23). After receiving the promise that she and her husband would be the source of an innumerable posterity, she continued to be childless and barren for decades. Finally, after miraculously giving birth to a son in her old age, she discovered the Lord commanded her husband to take the child’s life as a sacrifice.

Mosiah: A righteous Book of Mormon king and leader who led his people in peace (see Mosiah 6:6–7). Four of his sons chose to reject his example. They turned to evil works and were described as the “very vilest of sinners” (Mosiah 28:4). His sons actively tried to destroy the progress of the Church and lead others into sin (see Mosiah 27:10).

Esther: An orphan who experienced a remarkable change of fate to become wife to the king of Persia. She discovered that her entire people, the Jews, were going to be slaughtered by members of the Persian kingdom. She took her life into her own hands by approaching the king without invitation to beg for the lives of her people (see Esther 1–5).

Job: A man described as “perfect and upright” (Job 1:1) in keeping the commandments who experienced considerable tragedies, including the significant and traumatic loss of family members, his health, and possessions.

Abinadi: A bold prophet of the Lord who dutifully followed a commandment to preach repentance to a wicked people (see Mosiah 12:1). He was imprisoned because of his obedience. When he stayed true to his mission despite being given the chance for freedom if he would deny his own words, he was executed by being burned alive.

Emma Smith: Described by the Lord Himself as an “elect lady” (D&C 25:3). The faithful wife of the Prophet Joseph Smith was driven from her home multiple times, experienced the premature death of several children, and suffered the cold-blooded murder of her husband.

Surely there are many other examples throughout history of the righteous being tried and tested. Perhaps you are thinking of similar experiences with such trials in your life. After doing your best to keep the commandments of God and to honor your covenants, things still go wrong (including children being wayward, facing unemployment, being afflicted with sickness, having marital problems, etcetera). Some of the best people you know have experienced serious setbacks in life despite their ongoing efforts to do what is right. Disobedience does not seem to be the cause of their challenges. On the contrary, their lives appear to be exemplary in many aspects.

Based on the actual experiences of human beings as opposed to erroneous yet sometimes popular belief, we can safely conclude the following: Those who faithfully keep the commandments of God will very likely experience trial, suffering, and difficulty that can at times be almost too great to bear.

While this statement may be discouraging, we can gain a better perspective once we understand the reasons for our trials and difficulties. Describing opposition and challenges, Lehi explained the following:

By experiencing the negative, we learn to appreciate the positive (see Moses 6:55). This suggests part of our experience in life is going to be difficult, regardless of how obedient we are. Blessings do come to the faithful, but the timing and nature of such blessings can be challenging to understand. While obedience yields blessings, some blessings do not come for a very long time. Some blessings may even come in the form of trials and challenges. Your loving Father in Heaven blesses you with difficulties for your eventual benefit and growth. Sometimes we have a hard time seeing them as such.

I believe that before we came to Earth, we each sat down with our Father in Heaven in a personal interview. He explained what our mortal experience would be like. He outlined the trials we would face and how they would be perfectly designed for our optimal growth. We accepted His personalized plan for us and rejoiced in the knowledge that we could return to be with Him. When we came to Earth and crossed the veil, we forgot all we had learned in our premortal life. Our forgetfulness is evident when we question the purpose behind our trials. I think God feels sad when we blame Him for our difficulties. He tries to help us remember and realize the perfection in every step of His design.

We are not the first to have gone through trials and difficulties. Consider the accounts of those who have gone before us and how we can benefit from their examples. As we study their lives and experiences, we can learn how better to face our own challenges with faith and hope. Let’s learn from the life of another prophet who endured great hardship despite his faithful keeping of commandments and covenants. 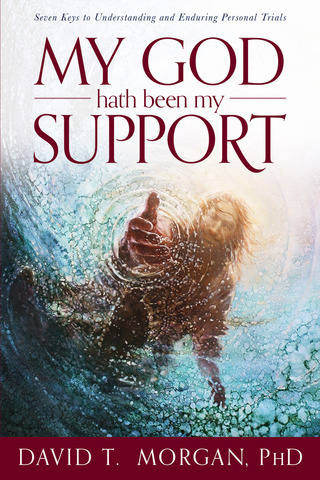 Nephi, that great hero of the Book of Mormon, is often viewed as a pinnacle of devotion: steadfastly faithful, profoundly spiritual, and unwaveringly obedient. But the beautiful passage of scripture often referred to as Nephi's Psalm reveals that, like all of us, Nephi faced his own inner struggles in this mortal existence. His heartfelt introspection demonstrates that amid the trials of life, discouragement can burden us all—but it can also be overcome.

In My God Hath Been My Support: Seven Keys to Understanding and Enduring Personal Trials, author David T. Morgan looks to the words of Nephi's Psalm to offer an inspiring message of hope and a loving call to action. Featuring tools and ideas on how to overcome adversity, increase feelings of self-worth, and endure the ups and downs of mortality, this scripture-based roadmap to a more fulfilling life is a joyous invitation to learn from Nephi how to transform sorrow into joy.