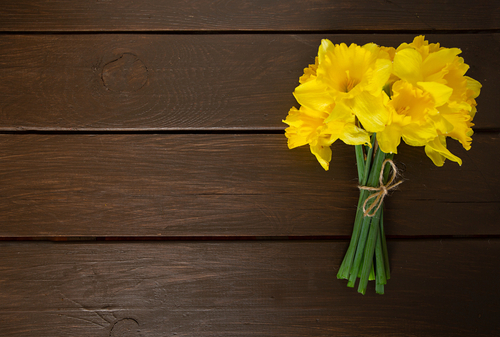 Why I believe in a God that gives us flowers

A bouquet of flowers has never been a practical gift. We cut down something beautiful, put it in a vase of water to slow down its death, and then present it as a sign of affection—strange when you think about it. Flowers never last more than a week or two and often cause quite a mess as petals and pollen take over your countertop. But I have always loved receiving flowers. I think the temporary, somewhat frivolous nature of the gift is what makes it special—I’m touched to be given something beautiful even when the giver knows it won’t last very long or serve any real purpose.

Last April, my grandpa died. Many family members and friends sent beautiful flowers to my family when they heard the news, but the bouquet that meant the most to me was delivered only hours after Grandpa’s death. It was small, wilted, and held together by a brown rubber band, but in my eyes, it was a personal delivery from God.

My grandpa had suffered from Parkinson’s disease for many years. His death was a long, painful process, and my family was exhausted from the care he required. Because he had lived with us for the last few years of his life, my siblings and I were very close with him. The freezer was always loaded with chocolate swirl ice cream when Grandpa was with us because in Grandpa’s mind there should never be a limit on ice cream, especially for his grandkids. And when that was all he could be convinced to swallow near the end of his life? We sat and ate ice cream with him.

On the day he died, I was away at college. My mom told me in the morning he had passed. Despite how abnormal the day became after that, I had to attend to my normal, busy day of classes and work. I didn’t say anything about his death to anyone, preferring to keep my grief to myself rather than having to talk about it. I made it through the day, but that evening I was emotionally spent.

As soon as I walked into the safety of my apartment that night, my eyes were full of tears. A few minutes after closing the door behind me, I heard a quiet knock. I debated not answering, but when the quiet knock repeated itself, I pulled the door open.

On my doorstep was one of my ministering sisters with a handful of dying daffodils fashioned into a bouquet with a rubber band.

Before I could even speak, she started apologizing. She said she had meant to drop the flowers off days ago, but since she waited, they had wilted, and she had been hesitant to bring them over in their droopy state. But to me, those flowers couldn’t have looked more beautiful. She was completely unaware that my grandpa had passed away that morning, and yet, the flowers came exactly on the day I needed them.

In my eyes, those flowers were a direct delivery from Heavenly Father. I had never told my ministering sister how much I love flowers, but Heavenly Father knew. Those flowers were evidence that He was aware of my family’s situation and that was enough to comfort me. I wasn’t given any directions on what to do next, but I knew that I wouldn’t be figuring it out alone.

With my flowers in hand, two verses from 3 Nephi 13 came to mind:

“Consider the lilies of the field how they grow; they toil not, neither do they spin . . . For your heavenly Father knoweth that ye have need of all these things” (3 Nephi 13:28, 32).

I believe in a God so loving and so personal that He delivers flowers—we just have to open the door and let Him in to receive them.