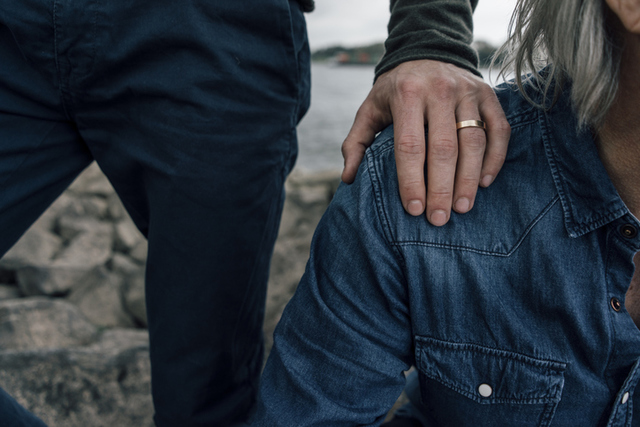 Why You Should Wear Your Wedding Ring

I’m just going to say it: Married people should wear wedding rings. Hear me out.

As a single woman in her mid-30s, most of the men I come across are married. I know this because when I meet a man (just about every man I meet, regardless of my personal interest in him) the first thing I look for is the ring. And most of the time it is there.  Which is great—I see the ring and know exactly where to put that man in my mind and think no more about it.

However, on more occasions than I would like to admit, I have fallen into the “he’s not wearing a ring so he must be single” trap.

In my first family ward (post single’s ward), there was this Sunday School teacher. I attended his class every time he taught because I thought he was very smart and gave the kind of insights I liked. And he was funny. And cute. And there was no ring, so I didn’t feel guilty for the little crush I was developing. In sacrament meeting I looked around to see if he sat with a woman but no, it was just him. And so the crush continued.

Now, I am not a particularly forward woman, so all I did was crush on him from afar and probably make more comments than normal during class. None of my actions were inappropriate, but still, I don’t think a wife would appreciate how I felt about her husband.

Months later I learned he did indeed have a wife; she just didn’t come to Church. I was seriously bummed. And then I felt guilty about being bummed. Not a good cycle.

I am sure men (and women) have valid reasons for not wearing wedding rings. Not everyone is a jewelry person, some people have jobs that make ring wearing difficult, some feel they don’t need it to prove commitment or to remember that they are married and act accordingly. And I get it: not every married person who doesn’t wear a ring is “looking” or acting inappropriately.

But here is the truth of it: an unmarried woman treats a man differently when he is not wearing a ring. (I assume this may be true of men toward ring-less females, but I am not as educated on that scenario.) When I assume a man is single, I think of him differently. I wonder if I could like him. I let myself speculate on his life, and if I am interested, I will ask more casual and familiar questions than I would otherwise. I am not particularly good at flirting, but plenty of women are, and I am sure they break out the flirting when they assume single status. If I don’t meet the guy but just see an interesting ring-less man out and about, I will spend time thinking about him, wishing I could meet him, and sometimes when I am feeling extra bold, I will try to start up a conversation. This is the biggest danger to me—that in your head you entertain thoughts when you assume the person is single.

Writing this all out makes me feel very vulnerable, so I feel I must state: I am not constantly “on the prowl” or aggressively chasing men without rings. And any confusion over the no-ring status has only ever led me to waste energy on unavailable guys and never resulted in awkward or embarrassing confrontations. (I credit this to my lack of initiative and generally being a pansy when it comes to dating.) And yet, I have had enough occasions where I have excitedly assumed a guy is single, only to be informed later of his actual status. And I have enough girlfriends who feel the exact same way, so I thought it was time to make our voices heard.

Like it or not, the ring is the cultural symbol of fidelity. It is a representation to ourselves AND to others that we have committed to remain faithful to one person. And if nothing else, a wedding ring is super helpful to us single people who could use a little “this is not the person you are looking for” warning up front.

So there you have it: My case for the wearing of wedding rings. Also, don’t forget to answer the poll questions below!