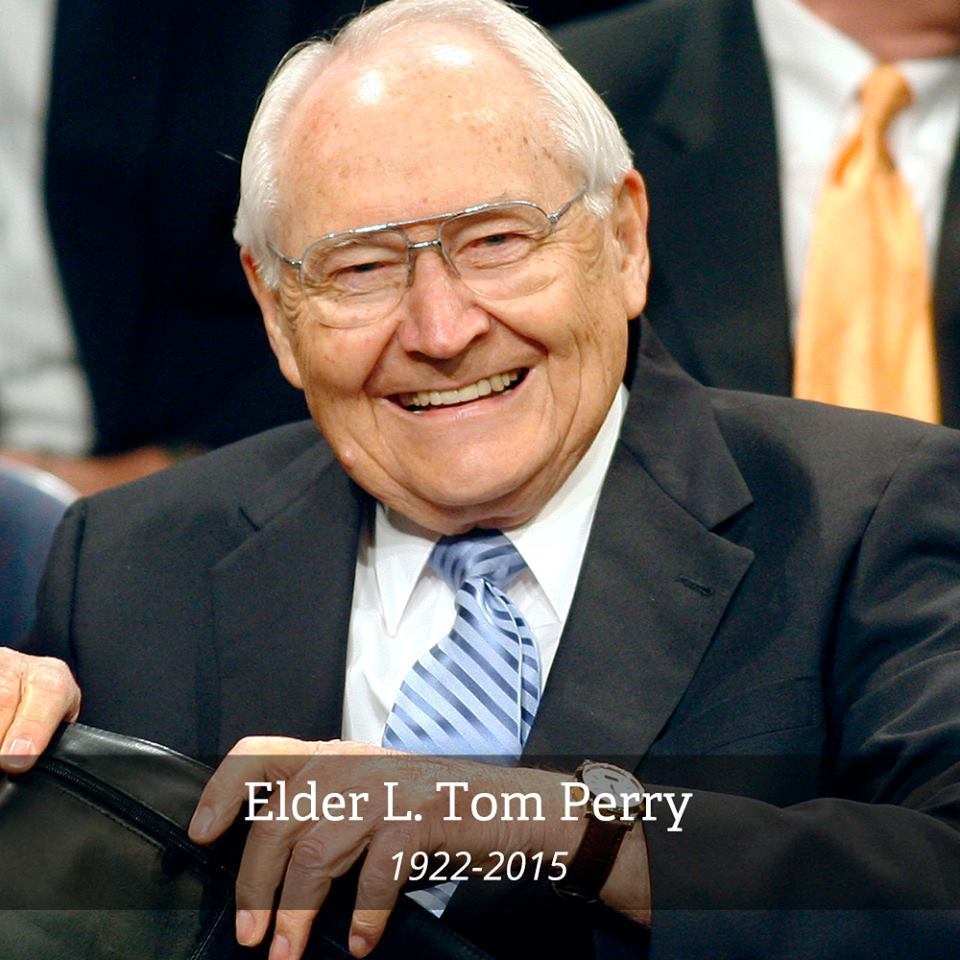 "Elder Perry was preceded in death by his first wife, Virginia Lee, with whom he has two daughters and a son. Virginia Perry died December 14, 1974. He is survived by his wife, Barbara Taylor Dayton, whom he married in 1976."

In the release, Elder Cook is quoted as saying, "That warmth, that graciousness, the fact that he really did like people and he liked all the members of the Church and appreciated them — I think that's how he'll be remembered."

We love Elder Perry, and will never forget his time spent here on earth helping each of us.

Here are a few things, in particular, we loved about him:

At age 92, Elder Perry was the oldest member of the Quorum of the Twelve Apostles—but his spunky demeanor often made us forget that. From his speaking delivery to his grin, everything he said and did seemed to reveal his energy and enthusiasm for life. Perhaps nothing spoke to Elder Perry’s youthfulness better than this candid moment between him and Elder David A. Bednar:

After serving a mission in the Northern United States, Elder Perry joined the Marine Corps. His military experience provided church members with many entertaining, touching, and sometimes thrilling stories—including this one he had while stationed in Camp Pendleton, California:

"My buddies had been after me each weekend to go with them into the dance hall in Los Angeles to have a good time. Each weekend I was encouraged to go. After several weeks of turning them down, thinking that that was no place for me, I decided just once to leave it to chance and see how it would turn out.

I started with them towards this big dance hall in Los Angeles. We were riding the streetcar, and as it progressed from stop to stop, it was filling up with many young ladies. They were not the type I had ever been around before. They were extremely forward. I felt very uncomfortable around them. As they approached me, I adopted a tactic completely unknown to a marine. I retreated.

On the back row of the streetcar, I found four young ladies whose appearance was entirely different. I asked them if they were going to the dance, and their reply was, 'Yes, but not to the same one you are.' Then they said, 'We are going to the Adams Ward to a Mormon dance. What do you know about the Mormon Church?' I was surprised, relieved, and willingly got off the streetcar with them, and had a most delightful evening at the Adams Ward. Have more confidence in yourself than allowing your decisions to happen just by chance."

His Enduring Testimony of Christ