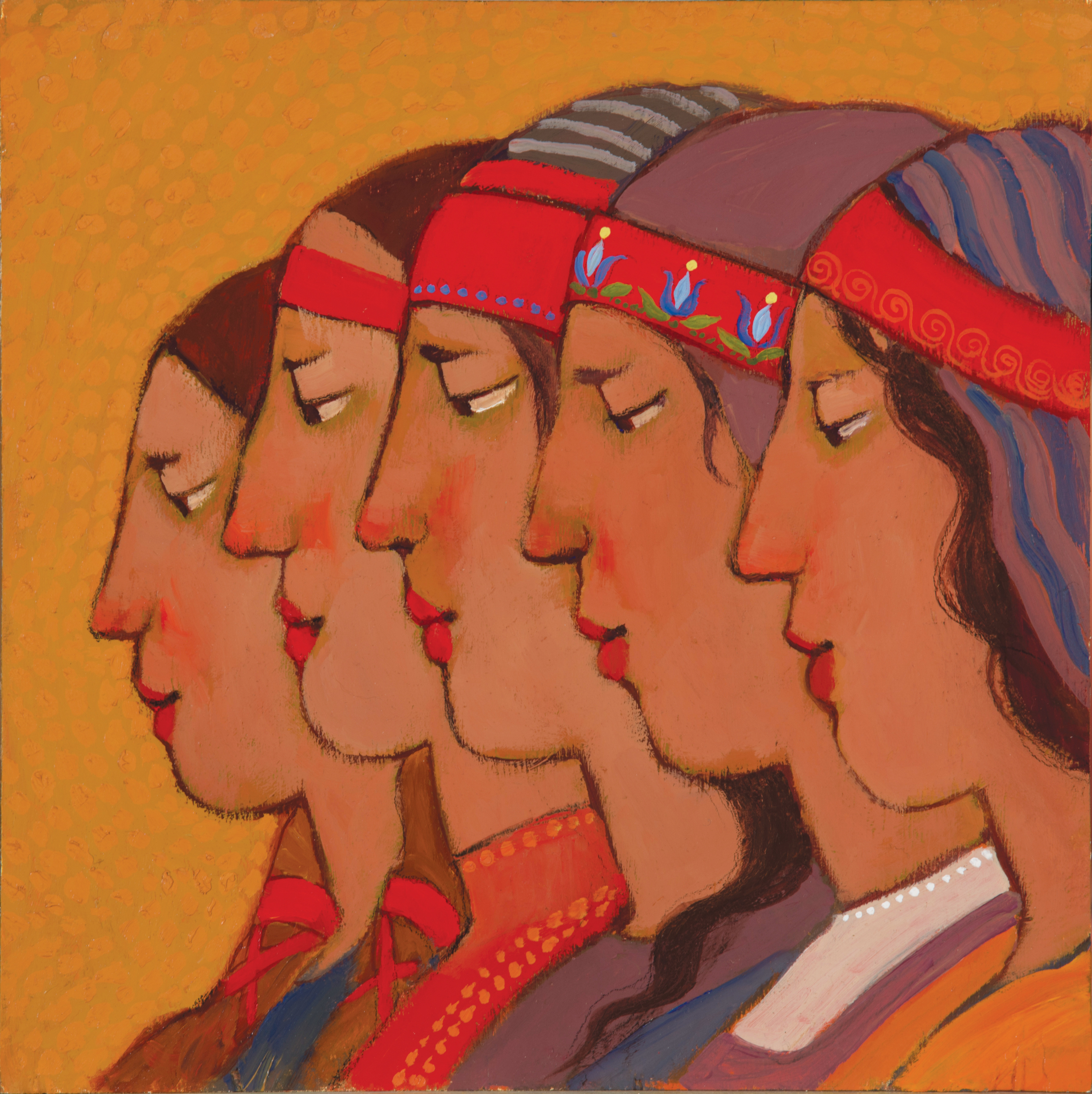 Mahlah and her four sisters, Noah, Hoglah, Milcah, and Tirzah, followed Moses through the wilderness toward the promised land. Painting featured in Girls Who Choose God.

Bethany and I spent years writing between continents, new babies, and changing jobs.  Along the way there are many lessons that struck us, but one lesson has hit home: scriptures and Church history show a wide latitude of ways women use their talents to serve God.

Once I began to recognize the varied roles and jobs that women have performed, I then asked what I could learn from them. From the talented women featured within the pages of the new book Girls Who Choose God and our research done for future volumes, here are five jobs women have performed in service of God:

Co-founder is probably my favorite role I get to play… and women create in a number of ways.

Every day I feel that family life is an exercise in co-founding. Eve, as the co-founder of the human race, must have felt the demands of her role but also the sheer joy of creation.

Women also co-create in other ways. In my own life, I co-owned a design and marketing studio for a decade. The rush of creation with color, line, form and molding the culture of a business was intense work and a daily delight.  I felt all of my talents being called upon to build something from nothing. During this time, I took to calling my mother (who had raised eight kids with intention and grace) my CCO—the Chief Culture Officer—as she often had the best ideas on how to bring disparate people together with a unified goal.  Now I work in business, an NGO to help village women in India, and write—creation is beautiful in all its many forms.

When I was picking a painting from Girls Who Choose God to print as a canvas piece of art, I selected the scene of Deborah marching with her army with bold banners flying and tassels swinging. (Plus, I’ve always loved the drama of a cape.) We know that Deborah was married and calls herself “a mother in Israel.” She was also a prophetess, judge, and leader of armies.

As a prophetess and judge, her decisions were known to be wise and people traveled from far away to receive her counsel.

Later, she was told by God to gather an army and instructed how to lead 10,000 soldiers in order to free her people.  After their success, Deborah praised God for their deliverance.

I think on many days I wish for the talent of Deborah’s wisdom, to be able to identify the wisest course of action and help lead others to it.  But, I know every day I could use the humility to ask God for guidance when I am feeling feisty and need to choose when or when not to fight. Deborah is a strong example of using her varied talents to serve God.

For me, sometimes it is easier to fight than to work for peace.  Yet the women of Anti-Nephi Lehi, after they heard the missionaries teach and were converted unto the Lord, were able to look at their traditions and make a change.  “They did lay down the weapons of their rebellion, that they did not fight against God any more, neither against their brethren.”

I have had this scripture earmarked in my Book of Mormon for many years. Often I wonder what the weapons of my rebellion are. Am I being too pig-headed?  Do I use sarcasm or stonewalling to fight?  Am I cultivating a soft heart? These women offer a powerful model of change when exposed to gospel truths.

I always wanted to be a spy when I was a little girl.  I searched out biographies of famous female spies and envied their daring.  I didn’t realize the example right in front of me from the Book of Mormon—the maid servant from Morianton’s camp. After a beating and despite extreme danger to herself, the maid servant from Morianton’s camp fled to Moroni. She told Moroni of Morianton’s plans to march north and endanger the liberty of the people.  Because of her bravery, Moroni was able to out maneuver Morianton’s army and again restore peace to the land.

When I think of this story, I think of the bravery demanded of this young girl. When have I chosen to put myself on the line to do what is good, not just for myself but for others as well?  Our Servant-Spy is an inspiring model.

Living in rural India, I have been thinking a lot about the gift of doctors. In frontier Salt Lake City, this was also an issue as many babies and mothers were dying in childbirth. Brigham Young asked a group of women to leave their families and move east for a number of years and study until they were qualified as doctors, nurses and midwives. Ellis Shipp chose to become a doctor after she had six children die in childbirth.

After years of struggle, Ellis returned to Salt Lake City and set up a nursing school. She trained over five hundred midwives and personally delivered over 5,000 babies.

I am awed at Ellis’ intelligence and hard work in order to learn how to bring babies safely into this world. Some villages in India have similar problems with as many as 60% of children dying before age three.  I personally have struggled with where I would give birth safely. If there were a competent doctor here now, I would quite literally cry for joy. Ellis’ talents were a gift.

Truly, they are bringing about goodness in this world.  Whether these talents are applied in or out of homes (or both), I celebrate such beautiful examples of magnifying our divine gifts. Choose to use your talents for good, in whatever way you prayerfully think best.

McArthur Krishna and Bethany Brady Spalding are the co-authors of a new children’s book, Girls Who Choose God.

Girls Who Choose God invites young readers (and those who love them) to make important choices of their own, following the examples of great women in the scriptures. With breathtaking illustrations, beautifully told stories, and insightful discussion questions, this delightful book is perfect for sharing, reading aloud, and drawing children into the scriptures.

All proceeds are donated to Interweave Solutions. For more information about the organization's good work, visit interweavesolutions.org.