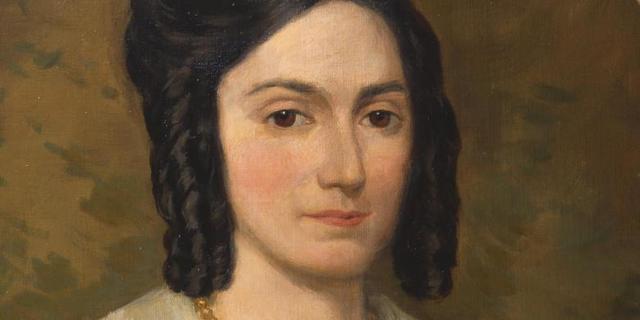 In a letter to her husband, Joseph, Emma Hale Smith wrote, “I desire the Spirit of God to know and understand myself, that I might be able to overcome whatever of tradition or nature that would not tend to my exaltation in the eternal worlds. I desire a fruitful, active mind, that I may be able to comprehend the designs of God, when revealed through His servants without doubting.”

This faithful woman sacrificed much to help bring forth the gospel as she served as the first president of the Relief Society and sacrificed to hold the Church and her family together while her husband was beaten and imprisoned for his faith. Among one of her most prevalent teachings and desires was for the women of the Church to be united in purpose.

Here are some wonderful insights we can learn about this brave woman from At the Pulpit: 185 Years of Discourses by Latter-day Saint Women.

1. Women have an extraordinary work to do.

President Emma Smith remarked we are going to do something extraordinary. When a boat is stuck on the rapids with a multitude of Mormons on board we shall consider that a loud call for relief.1 We expect extraordinary occasions and pressing calls. . . .

President E. Smith then arose and proceeded to make appropriate remarks on the object of the society, its duties to others, also its relative duties to each other, viz., to seek out and relieve the distressed, that each member should be ambitious to do good, that the members should deal frankly with each other, to watch over the morals and be very careful of the character and reputation of the members of the institution, etc.

2. We need to be unified, especially in serving others.

President E. Smith then rose and said that measures to promote union in this society must be carefully attended to. That every member should be held in full fellowship. As a society, hoped they would divest themselves of every jealousy and evil feeling toward each other, if any such existed. That we should bring our conduct into respectability, here and everywhere else. Said she rejoiced in the prospect before her. . . .

She said it was the duty of every person to inquire into the condition of the poor and represent their true state. . . . We should assist each other in this way.

Mrs. President said she was rejoiced to see the increasing union of the society. Hoped we should live right before God, among ourselves, and before the world. . . . Said we had nothing to do but to fear God and keep the commandments, and in so doing we shall prosper.

3. We should eradicate all evil from our hearts.

President E. Smith arose and addressed the meeting. . . . Her desire was to do good. Wished all the members of this society to assist her. Said it was necessary to begin at home, to eradicate all evil from our own hearts, and warn those who wish to join with us to come calculating to divest themselves of everything wrong and unite to expose iniquity, to search it out and put it away. She said the society had other duties to attend to than seeing to the wants of the poor. Exhorted the members so to conduct as to have the honor of commencing a good work and of carrying it out. Enforced the necessity of walking in a manner that would be approbated of God.

4. We should repent often and readily.

Mrs. President continued by exhorting all who had erred to repent and forsake their sins. Said that Satan’s forces were against this church. That every saint should be at the post.

5. We should have grace for ourselves.

President E. Smith arose and addressed the congregation. She said all must have grace for themselves, etc.

6. We find power in faith and prayer.

Mrs. President arose and addressed the society upon the necessity of being united among ourselves. Said we shall have sufficient difficulty from abroad without stirring up strife among ourselves and hardness and evil feelings one towards another, etc. . . .

We could govern this generation in one way if not another. If not by the mighty arm of power, we can do it by faith and prayer.2 If we will try to live uprightly, said she believed we should not be driven.3

Mrs. President continued by saying God knows we have a work to do in this place. We have got to watch and pray and be careful not to excite feelings, not make enemies of one another, etc.

7. We need to strengthen one another and have charity.

Mrs. President then arose and addressed the meeting upon the necessity of being united among ourselves and strengthening each other’s hands in order that we may be able to do much good among the poor. . . . We must throw the mantle of charity around to shield those who will repent and do so no more. . . . She advised all to abide the Book of Mormon and Doctrine and Covenants. . . . Also exhorted them to look after the poor.

1. The “rapids” refers to the Des Moines or Lower Rapids, an eleven-mile stretch of the Mississippi River just north of Keokuk, Iowa, where the river dropped about twenty-two feet. These rapids were impassable for steamboats during months of low water and were potentially treacherous during many other months. (Louis C. Hunter, Steamboats on the Western Rivers: An Economic and Technological History [New York: Dover, 1993], 188.)

3. This may be a reference to the Saints being driven from Missouri in 1839 and the hope that the Saints would not also be driven from their present location in Nauvoo.

Read At the Pulpit for free at lds.org or own a copy for your own home.

At the Pulpit contains fifty-four discourses given by Latter-day Saint women throughout the history of The Church of Jesus Christ of Latter-day Saints. Like Lucy Mack Smith, these women drew on inspiration and experience to declare their understanding of eternal truths. This book illustrates the history of women's public preaching in the church, but its most important feature is the actual words of Mormon women. From the time of Emma Hale Smith's earliest exhortations at meetings of the Nauvoo Relief Society, Latter-day Saint women have been charged to instruct their families and neighbors, their congregations and Relief Societies, and other organizations. The talks featured in this volume show Mormon women doing the spiritual and intellectual work inherent in a life of Christian faith—seeking to do good works, understand the atonement of Jesus Christ, and strengthen their own faith and the faith of those around them. These women endeavored to live what they believed and to help their listeners do so as well.

Written to the high scholarly standards of the Church Historian's Press, the book provides a resource for contemporary Latter-day Saints as they study, speak, teach, and lead.