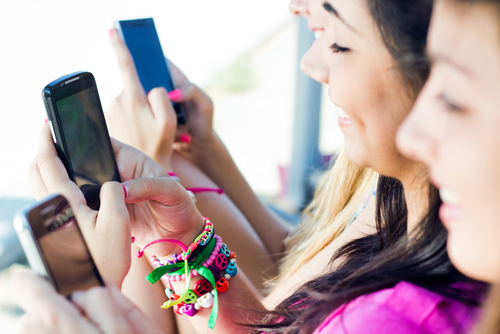 Electronics at Church: 5 Ways to Help Youth Become Engaged Instead of Distracted

It was a discussion about the sacrament. A seminary student was sharing feelings about the sacredness of the ordinance when another student jumped in.

“Yes! I just shot two people in the head with a sniper rifle!” he shouted.

The air was sucked out of the room.

So was the Spirit.

“Immediately the classroom atmosphere shifted,” says Zachary Horton, principal at East High School’s seminary in Salt Lake City, where the incident took place. Giggles, gasps, and gaping deflated what the teacher had been building toward and a student had been testifying of.

The student who called out was playing a game on his phone, and though Horton reports this incident was an extreme case, the struggle to pull attention away from phones and toward the teacher is a daily effort in this active, release-time seminary of 500 students.

“As a staff, we have wrestled with this issue,” Horton admits.

It’s a battle on Sundays, too. A conversation with a Young Women group in Salt Lake City revealed that for many, sacrament meeting is a place to scroll through Instagram and Snap Chat with friends. Sunday School turns into a plea bargaining session as the teacher begs for “just 15 minutes of your time without phones.” Youth leaders gently, but regularly, remind the young men and young women to put their phones under their chairs. They even reported a few extremes of their own—such as someone playing Fortnite during a prayer.

“Kids are just so used to using their phones,” explains Ruthie, a Mia Maid in Salt Lake City.

Horton adds: “In talking to our students, there is a belief that they can do both: ‘I am listening even though I’m playing a game,’” he says. “But if you are focusing on something on your screen, you are not listening or participating in class.”

A study by Common Sense Media reports that 78 percent of teens check their phones at least hourly, and 50 percent report feeling “addicted” to their phones. The Center on Media and Child Health and the University of Alberta report 67 percent of teachers surveyed say students are distracted in the classroom by digital technologies and 75 percent of teachers notice a decrease in the students’ ability to focus on educational tasks.

In other words, church is not the only place kids struggle. But it’s possible that church could be the place where they learn to strike the balance.

Church leaders have repeatedly acknowledged the blessing of technology, starting with Brigham Young, who said, “Every discovery in science and art that is really true and useful to mankind has been given by direct revelation from God. . . . We should take advantage of all these great discoveries . . . and give to our children the benefit of every branch of useful knowledge, to prepare them to step forward and efficiently do their part in the great work.”

Elder David A. Bednar has admonished Latter-day Saints to “sweep the earth as with a flood” through technology. “The Lord is hastening His work, and it is no coincidence that these powerful communication innovations and inventions are occurring in the dispensation of the fullness of times,” he said at a BYU Education Week devotional in 2014.

The Church engages in media campaigns, Facebook pages, Instagram accounts, and Snap Chat. Church leaders across the spectrum carry smartphones and tablets to church and meetings. Missionaries are issued tablets or are required to purchase smartphones.

“Their use is appropriate, and they are a blessing,” said President M. Russell Ballard during a CES devotional in May 2014. “However, when smartphones begin to interfere with our relationships with friends and family—and even more importantly, with God—we need to make a change.”

Youth innately sense the truth of this counsel. Paige, a Mia Maid in Salt Lake City, points out, “Phones are good for many reasons. They are not all bad. But it’s different in different environments.”

Makena, a freshman at East High School, is a little more blunt: “It’s straight up disrespectful to have your phones out [in church],” she says. “We are learning about God and you are playing Fortnite. So it’s actually not just disrespectful to the teacher, but it’s disrespectful to God.”

“Our primary goal is for everyone to have a spiritual experience and strengthening faith in our Heavenly Father and the Lord Jesus Christ through Sabbath Day observance,” said President Ballard in an April 2015 leadership training meeting. Then he counseled on boundaries: “Surely we can expect that cell phones and iPads and games and food can be set aside for one precious hour out of 168 hours in a week for the sacrament meeting that is devoted to Heavenly Father and . . . Jesus Christ.”

President Ballard told a group of young single adults that he worries “that some of you check your email, Facebook, Twitter, or Instagram accounts or send text messages during . . . our sacred sacrament meeting. In this important meeting, we should be focusing on the Lord … instead of hooking up to our multimedia devices.”

Additionally, the Church announced on May 1 that meetinghouse Wi-Fi will block a range of social media and online games, including Instagram, Twitter, and Pinterest. Members can still access these sites using their own data. But the message is clear that boundaries should be established.

What those boundaries are is another matter. An informal survey of parents, teachers, and leaders shows the spectrum of approaches.

Restrict Phones: “I think parents should take a stand and not allow their children to bring phones to church,” says Marcia Jacobs, a mother of three in Salt Lake City. “They are unnecessary. You can accomplish every needful thing in a church setting without them.”

“That’s how I was raised,” says Haylee Turner, a college student from Las Vegas, Nevada. “I never was allowed to bring my phone or iPod to church. I always had to bring my scriptures or get some from the library.”

She feels it benefitted her in the long run. “It was an early example of practicing self-mastery and having respect for the Sabbath,” she says. And while she uses her phone at church now, that lesson of self-mastery has stuck with her.

Engage Students: A teacher of youth in St. Louis, Missouri, thinks technology problems are easily solved: “You keep them engaged,” he says. “I taught 12 and 13-year-olds in Sunday School for a long time and now I teach the priests. No one sits behind anyone, we sit in a circle, and technology is embraced as they look up scriptures, talks, and videos throughout the lesson.”

Bishop Mike Loud, from Liberty, Utah, acknowledges, “Are youth going to want to use their phones? Sure. But if we can keep them engaged, with the very best teachers and advisors, we begin to win that battle.”

Embrace Technology: Monica Weeks, mother of two in Puerto Rico, says she personally prefers to study scriptures on her phone—at church and at home—to utilize the tools for highlighting and note-taking. When it comes to her sons she says, “This is just a major way people access information nowadays, and it’s better to teach your children to set boundaries during church and hopefully establish good habits for when they are adults.”

Self-Assess: In a blog post on lds.org, Michelle Torsak considered this very question: “Should we use mobile devices at church? Ultimately I decided it isn’t a question of ‘we,’ as in members collectively. It’s a question of ‘I’—should I use my mobile device at church?” In answer to that question, she developed personal guidelines to self-assess her technology use: “Does it help me worship? Does it help me engage? Does it show I care?”

Model Attitudes: Horton notes youth learn attitudes, not just behaviors, from their parents. “It’s not just their actions that the youth pick up, but it’s their parents’ attitude toward technology. If parents can try and model an attitude of engagement [with technology] and then follow it up with structure and guidelines in the home, that might be the best foundation,” Horton says.

Invite Youth into the Conversation: Author and parenting consultant Linda Eyre feels the solution lies with the youth. “Instead of spending so much time worrying about how to restrict phone use and social media, we should be spending much more time communicating about what our kids think, having them communicate their feelings, and making pacts with them about usage,” she says. “If the kids feel they have ownership in the decisions about their use of phones at church, in seminary, etc., those parameters are so much more likely to be successful.”

Horton agrees. “I am full of confidence that when presented with truth, testimony, and constant and consistent teaching on these topics, these wonderful youth will respond in the best of ways,” he says.

A Child Will Lead You

Horton shares another experience—one that he says is far more common. He saw a student with her paper scriptures and her journal on her desk and her phone out, taking pictures. She snapped a shot of something in her scriptures, typed something, and put her phone down. A few minutes later she did it again. Curious, Horton asked her after class what she was up to.

Her response: “I am Snap Chatting friends scriptures I’m studying that I know they need.”

“And I thought, ‘Wow, that’s power,’” recalls Horton. “She’s engaged in the best kind of gospel study, and she is involved in the very act of ministering.”

Moments like these have convinced Horton that the youth will be the ones to figure this out. “I am a digital immigrant, but they are digital natives. They are growing up with this,” he says. “I’m convinced these youth are going to figure out how to handle this. It’s going to be a rocky road for them. I think they can use every bit of training and guidelines and accountability we can give them. But this generation will figure it out.”