Many members of the Church feel a deep connection with the First Presidency and Quorum of the Twelve Apostles. As we read their words and listen to them speak twice a year in general conference, we are able to learn from their unique spiritual strengths and distinct teaching styles. Since we are accustomed to seeing Church leaders in spiritual settings, it can be tempting to think of these men only in a spiritual light; however, they are multidimensional people with individual interests and personalities.

Here are some interesting hobbies and hidden talents of six Church leaders: 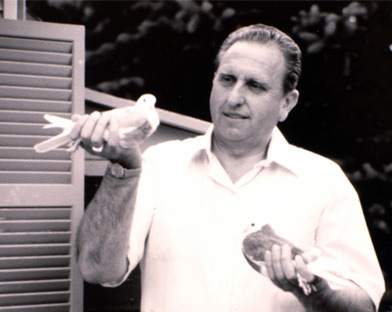 President Thomas S. Monson was fascinated with pigeons as a young boy. Since then, he has raised prize-winning pigeons and learned important lessons from his experiences.

When he was 15 years old, he was called as the teachers quorum president in his ward. His adviser, Harold, noticed his interest in pigeons and offered to give him a pair of purebred Birmingham Roller pigeons. President Monson enthusiastically agreed to the offer and went to Harold’s pigeon loft the next evening. In addition to a male pigeon, Harold gave him a female pigeon that was missing one eye. He counseled, “Take them home to your loft. Keep them in for about 10 days, and then turn them out to see if they will remain at your place.”

“I followed Harold’s instructions,” President Monson said. “Upon his release, the male pigeon strutted about the roof of the loft, then returned inside to eat. But the one-eyed female was gone in an instant. I called Harold and asked, ‘Did that one-eyed pigeon return to your loft?’ ‘Come on over,’ he said, ‘and we’ll have a look.’”

When President Monson went to his adviser’s home, Harold said, “Tom, you are the president of the teachers quorum. What are you going to do to activate Bob, who is a member of your quorum?” President Monson told him he would invite Bob to quorum meeting that week, and Harold handed him the one-eyed pigeon. He counseled President Monson to keep her in the loft for a few more days and then to release her again. “This I did, and once more she disappeared,” President Monson said. Each time he released the female pigeon, she would return to the adviser’s loft and Harold would ask President Monson about another member of the quorum. Through these experiences, President Monson learned the importance of stewardship and reaching out to individuals. He said,

“I was a grown man before I fully realized that indeed Harold, my adviser, had given me a special pigeon, the only pigeon in his loft he knew would return every time she was released. It was his inspired way of having an ideal personal priesthood interview with the president of the teachers quorum every two weeks. I owe a lot to that one-eyed pigeon. I owe more to that quorum adviser. He had the patience and the skill to help me prepare for responsibilities which lay ahead” (“The Army of the Lord,” General Conference, April 1979).

BONUS
Hidden Talent: Ear Wiggling
In 2008, President Monson demonstrated his ability to wiggle his ears in the general conference address, “Examples of Righteousness.” (He wiggles his ears around 10:40 in the video below.) 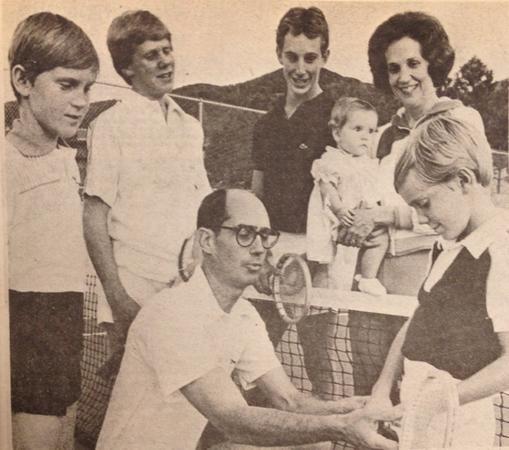 President Eyring loves the sport tennis, and it has played an important role in his life. In fact, his first date with his wife, Kathleen Johnson Eyring, involved playing tennis:

“[When they first met], Hal was thrilled by Kathy’s reply to his question about her interests: ‘I like to play tennis,’ she said. The words were music to Hal’s ears. . . . He’d been playing tennis several times a week with a former collegiate tennis player; his game was at an all-time high. It would be the perfect first date.

“The initial set of tennis, played several days later on Harvard’s clay courts, went just as Hal had planned: he won six games to three. As they switched sides for the next set, he airily complimented Kathy’s play, in a manner intended to be charming. She stared straight ahead and said nothing. While he prepared to serve from his baseline, she crouched low behind hers, gently but firmly hitting the clay court with her wooden racquet.

“Hal wouldn’t recall the final score of that second set, but in later years he freely admitted, ‘She cleaned me out’” (Robert I. Eaton and Henry J. Eyring, I Will Lead You Along: The Life of Henry B. Eyring). 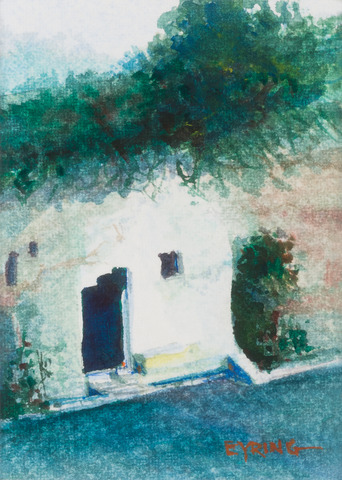 He also likes to sketch moments from everyday life, such as this view from his workroom. 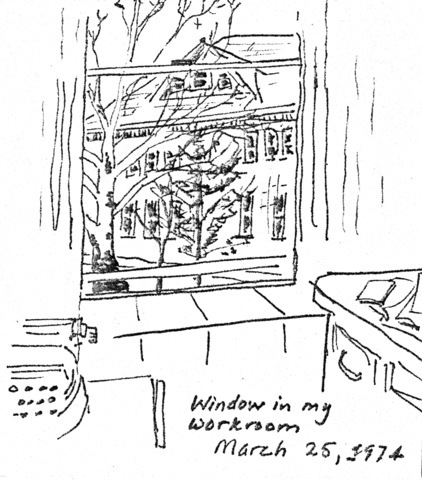 Photos from I Will Lead You Along: The Life of Henry B. Eyring 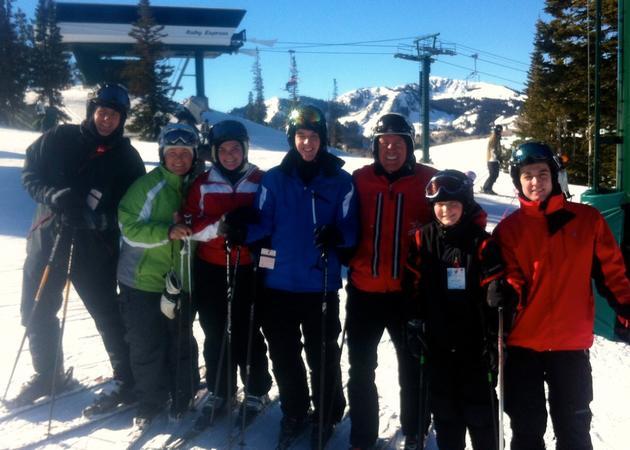 President Uchtdorf enjoys skiing with his family, although he has joked that “the laws of physics have changed—and not to [his] advantage” as he has grown older.

In his October 2013 general conference address, he shared a story about skiing with his 12-year-old grandson. He said,

“We were enjoying our time together when I hit an icy spot and ended up making a glorious crash landing on a steep slope.

“I tried every trick to stand up, but I couldn’t—I had fallen, and I couldn’t get up. . . . I began to wonder what it would take to rescue me. That was when my grandson came to my side. I told him what had happened, but he didn’t seem very interested in my explanations of why I couldn’t get up. He looked me in the eyes, reached out, took my hand, and in a firm tone said, ‘Opa, you can do it now!’

“I am still shaking my head over this. What had seemed impossible only a moment before immediately became a reality because a 12-year-old boy reached out to me and said, ‘You can do it now!’ To me, it was an infusion of confidence, enthusiasm, and strength. . . .

“There may be times in our lives when rising up and continuing on may seem beyond our own ability. That day on a snow-covered slope, I learned something. Even when we think we cannot rise up, there is still hope. And sometimes we just need someone to look us in the eyes, take our hand, and say, ‘You can do it now!’”

Dancing with his wife, Harriet

President Uchtdorf and his wife, Harriet, enjoy dancing together. A popular Facebook video shared by Claudio Correa captured a fun moment between the Uchtdorfs while they were visiting Tijuana, Mexico, for the December 2015 temple dedication. Check out the video below:

Horseback Riding with His Children 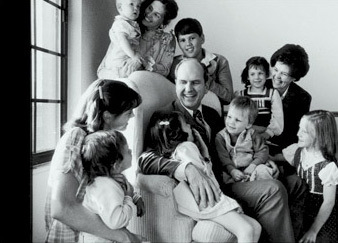 While his children were growing up, President Nelson had a tradition of spending one day a year horseback riding with them. He said:

“I cherish dearly the memory of riding the horse with each one of the young ones as they came along. I’d bury my nose in the hair of that little one and wrap my arms around her or him. I’m sure each of the children thought I was hanging on to give them security while they were riding the horse. But I was clinging to a precious moment that I had alone with each loved one as that turn came. On each occasion I offered a prayer of gratitude to my Father in Heaven for the great privilege of being a father to this one, for I knew each to be such a special spirit” (“Elder Russel M. Nelson: Applying Divine Laws,”Ensign, June 1984).

Singing and Playing the Piano and Organ

President Nelson loves music. He has perfect pitch and performed in several choirs, musicals, and quartets in high school and college. Although he didn’t enjoy practicing the piano as a young boy, he resumed his musical studies in college. Today, he enjoys playing the piano and the organ. He often plays the organ accompaniment for the opening hymns in the weekly meetings of the First Presidency and Quorum of the Twelve Apostles.

The Nelson family loves to perform together, and each of the children plays an instrument and sings. Some of his daughters and granddaughters performed the hymn “Jesus, the Very Thought of Thee” as part of President Nelson’s 2008 CES fireside address, “Power and Protection Provided by Worthy Music.” (The musical number begins around 20:10.) 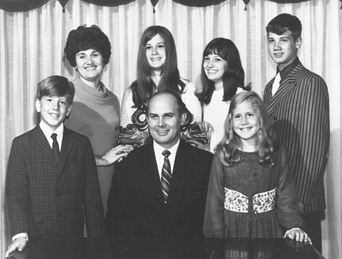 Elder Oak’s motto is: “Work first, play later.” His family, however, jokes that it should really say: “Work first, play never.” Although he is a hard worker, he enjoys spending time fishing. His son, Lloyd, remembers fishing with his father at the Spanish Fork River almost every Saturday when he was a young boy. His late wife, June, said of his fishing-style, “If he fishes, he fishes with the same intensity that’s there when he goes after his casebooks.”

► You'll also like: Photos: When Elder Oaks Was Cosmo the Cougar at BYU 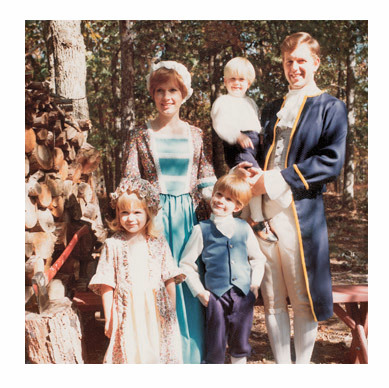 The Christoffersons taught their five children about history through role-playing and dressing-up. Although his legal career kept him busy, Elder Christofferson made an effort to always prioritize his family and church duties. On the importance of fatherhood, he has taught:

“Fatherhood requires sacrifice, but it is a source of incomparable satisfaction, even joy. Again, the ultimate model is our Heavenly Father, who so loved us, His spirit children, that He gave us His Only Begotten Son for our salvation and exaltation (see John 3:16). Jesus said, ‘Greater love hath no man than this, that a man lay down his life for his friends’ (John 15:13). Fathers manifest that love as they lay down their lives day by day, laboring in the service and support of their families” (“Fathers,” General Conference, April 2016).

President Boyd K. Packer enjoyed creating paintings and carvings of birds and nature scenes. He said, “Carving was restful to me. Sometimes when I got a little stressed or cranky, my wife would say, 'Well, you had better start another carving.' Bird carving kept my hands busy and my mind free to think, ponder, and pray." 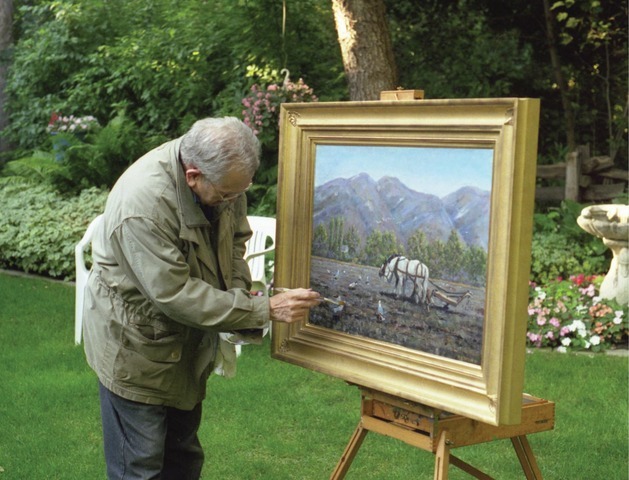 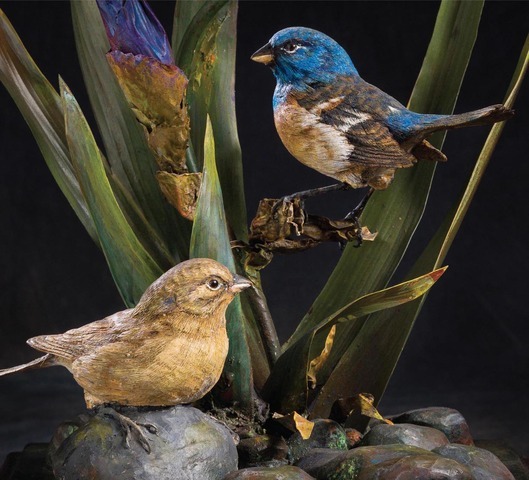 Photos from The Earth Shall Teach Thee: The Lifework of an Amateur Artist

► You'll also like: Photo Gallery: The Artwork of President Packer

Elder Scott was inspired to take up painting after visiting a commercial artist around 50 years ago. He took some lessons with a local art teacher and began to create watercolor paintings. He said, “You don’t have to be an expert to try something. One of the greatest blessings that come from trying something like painting is to appreciate the work of those who do it very well.” 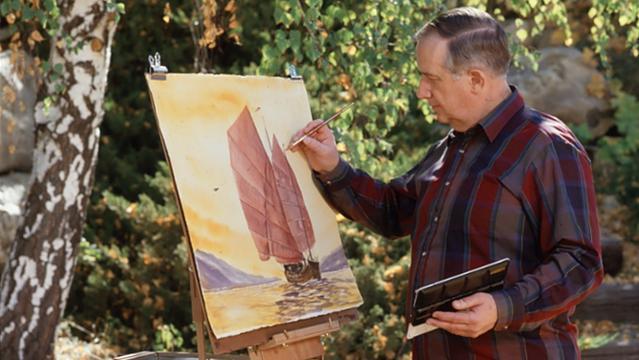 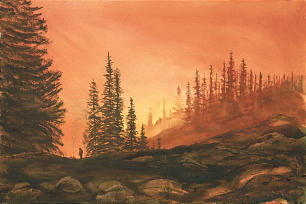 ► You'll also like: Photo Gallery: The Artwork of Elder Scott

Thanks to Utah Valley 360 for providing some good insights.