byJohn Hilton III and Brad Wilcox, excerpted from "52 Life-Changing Questions from the Book of Mormon" | Dec. 31, 2018

The phrase “an eye of faith” appears only two other times in the scriptures (Alma 32:40; Ether 12:19). Part of looking forward with an eye of faith is the spiritual ability to see ahead and keep moving forward even though we do not know for certain what will happen. For example, Alma taught that we should “nourish the word, looking forward with an eye of faith to the fruit thereof” (Alma 32:40). In other words, even though we may not yet be able to see the results of the spiritual efforts we are making, we should continue to make those efforts. In time, we will be able to taste of the sweet fruit that we once saw only with “an eye of faith.” Moroni taught, “There were many whose faith was so exceedingly strong, even before Christ came, who could not be kept from within the veil, but truly saw with their eyes the things which they had beheld with an eye of faith, and they were glad” (Ether 12:19).

Elder David A. Bednar gave a description of faith that can help us better understand what it might mean to “look forward with an eye of faith.” He described three elements of faith as “(1) faith as the assurance of things hoped for which are true, (2) faith as the evidence of things not seen, and (3) faith as the principle of action in all intelligent beings.”1

Elder Bednar explained: “I describe these three components of faith in the Savior as simultaneously facing the future, looking to the past, and initiating action in the present, . . . True faith is focused in and on the Lord Jesus Christ and always leads to action.”2

Perhaps we could visualize this statement with the following diagram:

Let’s imagine a person faced with an important decision. As she prays about what to do, she has a small impression to move forward in a certain direction. She does not yet have a sure knowledge about what to do, only quiet “assurance” from the Holy Ghost. As she looks back over her life, she sees many times when she has followed promptings from the Spirit and things have worked out. This is “evidence” that can help her take “action” in the present and move “forward” with an eye of faith. As she does move forward, acting in faith, things will work out—and what was initially an “assurance” will turn into “evidence” that will help her continue to take action in the future when faced with similar situations. Elder Bednar provided this explanation:

“Faith as the evidence of things not seen looks to the past and confirms our trust in God and our confidence in the truthfulness of things not seen. We stepped into the darkness with assurance and hope, and we received evidence and confirmation as the light in fact moved and provided the illumination we needed. The witness we obtained after the trial of our faith (Ether 12:6) is evidence that enlarges and strengthens our assurance.”3

John shares the following experience of when he was blessed to see “with an eye of faith”:

“I was called to serve in the Colorado Denver North Mission, English speaking. Early in my mission I served in an area where there were many Spanish-speakers. I learned a simple door approach in Spanish and enjoyed attempting to communicate with others in that language. I felt a small spiritual impression that when I returned from my mission I should learn Spanish.

“I remembered that prompting, and when I returned home, I enrolled in Spanish 101. It was a hard class, but I had seen evidence in my life previously that following promptings was a good thing, so I kept moving forward. I used every opportunity I could to practice my Spanish, and I felt impressed to seek opportunities to move to a Spanish-speaking country so that I could significantly increase my fluency. While I was enrolled in Spanish 102, I made numerous contacts with internship providers in a variety of countries, but nobody wanted to hire me. I even volunteered to work for free, but nobody accepted!

“I was discouraged, but I realized that perhaps the timing was not right. In retrospect, I can see that was the case. The summer I wanted to be abroad was the same summer I began courting Lani, the woman I eventually married. Six months later, we were engaged, and she and I began discussing the possibility of moving to Mexico after we were married so that we could develop our language skills together.

“At the time, I was taking twenty-two credit hours and working twenty hours a week. I didn’t have time to do the legwork necessary to find an internship. But I e-mailed a few of the contacts I had made the previous year, and almost immediately a situation arose in which Lani and I could work for an educational institution in Mexico for three months, beginning shortly after we were married. We were even able to get financial support to cover the costs of the trip.

“Looking back, I saw that at least part of the reason I had felt prompted to seek for opportunities to work in a Spanish-speaking country the previous year had been to lay the groundwork so that Lani and I could go to Mexico together.

“We had a wonderful experience, and by the end of that summer I was fluent in Spanish. After we returned to the United States, I was called as a ward mission leader. In that calling I had several opportunities to speak Spanish as I invited people to come unto Christ.

“Four years later, I received an e-mail, which was sent to all of the employees of Church seminaries and institutes. The e-mail said that they were looking for a person to coordinate the seminary and institute programs in Miami, Florida. A requirement for the position was the ability to speak Spanish. As I read the e-mail, I felt certain that I should apply.

“Within seventy-two hours I was offered the position, and our family moved to Miami shortly thereafter. We had incredibly wonderful experiences during the time we lived there, and I truly believe the opportunity for our family to be in Miami at that time was divinely orchestrated.

“On my mission I felt an impression to learn Spanish. I didn’t know what would happen—I just had an ‘assurance’ that I should move forward with an eye of faith and take ‘action’ in the present. I did so, and years later I see ‘evidence’ that I had pursued the right course.”

Looking forward with an eye of faith can give us power to make hard decisions in the present, knowing that great blessings will come in the future. One young couple faced a difficult decision about where they should be married. Because none of their parents could enter the temple, they would have no family members present if they chose to marry there. Despite this circumstance, this young couple looked forward with an eye of faith and were married in the temple. In the intervening decades, they raised a righteous family and have seen each of their children marry in the temple. Because they acted in faith, their posterity has been richly blessed.

It is not always easy to look forward with an eye of faith. President Dieter F. Uchtdorf explained, “We don’t always know the details of our future. We do not know what lies ahead. We live in a time of uncertainty. We are surrounded by challenges on all sides. Occasionally discouragement may sneak into our day; frustration may invite itself into our thinking; doubt might enter about the value of our work. In these dark moments Satan whispers in our ears that we will never be able to succeed, that the price isn’t worth the effort, and that our small part will never make a difference. . . . [But] God will bless you and open the eyes of your understanding so you can see the end from the beginning.”4

Things may look dark—but they will get better. We can look toward the future with an assurance that things will work out because we can look to our past and see evidence of the ways in which the Lord has helped us previously. This will give us the strength to take action in the present and move forward “with an eye of faith.” 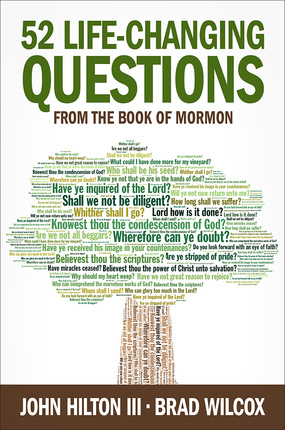 Read more about interesting questions from the Book of Mormon in John Hilton III and Brad Wilcox's book, 52 Life-Changing Questions from the Book of Mormon. Has a question ever changed your life? "A good question ... is like an alarm clock," wrote Elder Tad R. Callister. "It awakens us out of our mental doldrums [and] jump-starts our mental engines."

A woman was in a church meeting, studying Philippians 4:8: "Whatsoever things are true, ... honest, ... pure, ...lovely, [or] of good report; if there be any virtue, and ... any praise, think on these things." She felt the Holy Spirit say to her, "Is there anything honest, pure, or lovely in your soap opera?"

She had to confess that the program was not lovely or of good report or praiseworthy. Then the Spirit whispered another question: "So what are you going to do about it?"

What this sister heard from the Spirit that day were life-changing questions, and her decision to give up her soap opera made a profound difference in her life.

Where can we find questions that will awaken us out of those mental—and spiritual—doldrums? Popular authors John Hilton III and Brad Wilcox help us recognize and ponder fifty-two powerful questions from the Book of Mormon—one for each week of the year. One short chapter each week has the power to change your life.