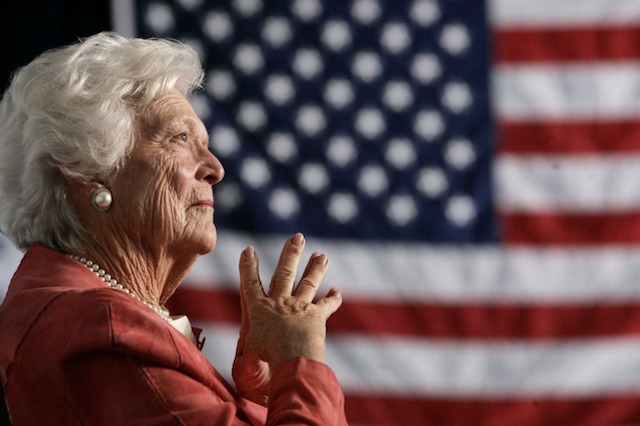 On Tuesday, April 17, Barbara Bush, former first lady and wife to former U.S. president George H.W. Bush, passed away at the age of 92. We honor her legacy of Christian values and her advocacy for the family.

In a general conference talk on parenting in October 1990, then-Elder James E. Faust of the Quorum of the Twelve Apostles quoted Barbara Bush from a speech she gave to graduates of Wellesley College:

"Harmony, happiness, peace, and love in the home can help give children the required inner strength to cope with life’s challenges. Barbara Bush, wife of President George Bush, a few months ago said to the graduates of Wellesley College:

Her message echoes the famous quote by President David O. McKay, "No other success can compensate for failure in the home."

Throughout her life, Barbara Bush prioritized her family and taught the nation to do the same. She was also open about her belief in a loving God. Six years ago, she said in an interview with The Washington Post, "I'm a huge believer in a loving God. And I have no fear of death, which is a huge comfort because we're getting darned close."

President George H.W. Bush met with General Authorities several times throughout his presidency and admired Latter-day saints and their leaders for their values and service. He also invited the Mormon Tabernacle Choir to sing at his inauguration and called them, “a national treasure” during his swearing-in ceremony.

We are grateful for Barbara Bush's beautiful example and join others in celebrating her life of love and service.