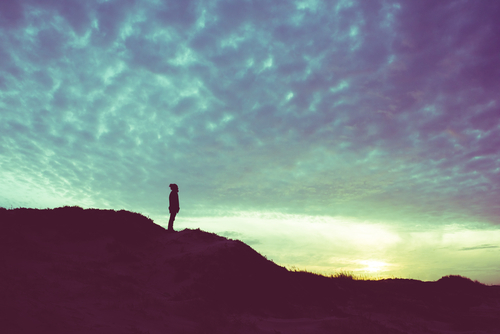 Why Ambiguity in the Gospel Is a Good Thing

This excerpt originally appeared in the January/February 2019 issue of LDS Living magazine.

Bumping into conflicts anywhere in our lives, but especially in the gospel, can make us want to dodge the ambiguity so we don’t have to deal with the tension it creates. Still, as Joseph Smith once said, “by proving contraries, truth is made manifest.”

When encountering ambiguity, some simply prefer reverting to the comfort of one viewpoint over carrying the discomfort required to navigate and, eventually, be enlightened by a continuing paradox—like justice and mercy. To move past our confusion, we must remain open, learn to honor competing principles, accept the tension, and transcend an either-or mindset. Then the tension becomes productive.

During my time as dean of the Brigham Young University Law School in 1987, President Ezra Taft Benson spoke “To the Mothers in Zion” in a Churchwide Sunday evening broadcast for parents. He described motherhood as “the noblest calling of all”; indeed, “motherhood has the greatest potential influence either for good or ill in human life.” After emphasizing the importance of having and nurturing children, President Benson said that through death, divorce, and other “unusual circumstances,” mothers may be “required to work for a period of time.” But he urged each father “to do all in his power to allow his wife to remain in the home caring for the children.” And he expressed genuine empathy for childless and unmarried faithful women.

The morning after the talk, as my family law class began, Mitzi Collins, a student, raised her hand. “Dean Hafen,” she asked, “could we discuss President Benson’s talk from last night?” I nodded and suggested we talk right after class. Mitzi shook her head gently, “Could we talk about it now? We really need to talk—now.”

I knew and respected Mitzi. She was the president of the Women Law Students Association, an excellent student, and a devoted Latter-day Saint. Then I saw virtually all of the women students nodding in agreement with her.

So we began a very open conversation about President Benson’s talk that lasted until the class period ended. I learned from these students that already that morning some of the women had found notes left on their carrels by well-meaning but thoughtless male students who had written statements such as “Law school admission is so competitive. Please let a man have your place in our class.”

After class, I agreed to have a similar discussion with all of the female law students that afternoon in the student lounge. Some male students, including those who had placed the notes on the women’s carrels, felt vindicated by their narrow reading of some of President Benson’s language. They were troubled by our growing number of female students, sometimes judging them as living out of harmony with Church teachings. Now they were even more determined to remain unmoved.

Others took the opposing view, tending generally to downplay what President Benson said if they didn’t agree with it. But Mitzi and many of her friends represented a third viewpoint, feeling caught in the gap between the ideal and the real. They had enrolled in our law school with idealistic visions of what they could do with their legal education, single or married. But now, because of the respect they felt for the president of the Church, they wondered if they had done something wrong. They sincerely wanted to follow the prophet. This law school had been their hope; now that hope felt dashed.

I first told the students that during my BYU–Idaho years, I had attended monthly Church Board of Education meetings with our senior Church leaders—including President Benson. I knew firsthand how those leaders felt about the law school. I said, “The Brethren know you women students are here, and they are glad!” Both in public and in private, I had heard them express many positive variations on President Gordon B. Hinckley’s oft-repeated counsel to Latter-day Saint women: “Get all of the education that you possibly can. Life has become so complex and competitive. . . . You will be expected to put forth great effort and to use your best talents.”

At the same time, the general principles President Benson had taught about mothers later turned out to coincide with a key theme in the Church’s “The Family: A Proclamation to the World,” issued in 1995:

By divine design, fathers are to preside over their families in love and righteousness and are responsible to provide the necessities of life and protection for their families.

Mothers are primarily responsible for the nurture of their children. In these sacred responsibilities, fathers and mothers are obligated to help one another as equal partners. Disability, death, or other circumstances may necessitate individual adaptation.

I wanted them to know that these true principles applied to society as well as to the Church. Drawing on my own research in United States family law, I expressed personal concern that our society increasingly devalues motherhood—even though the social science research has shown for years that good mothering is critically important. I don’t recall just what illustrations I shared then, but those data were similar to more recent research findings. A 2005 study, for example, found that 81 percent of American mothers considered their mothering the most important thing they do, even though only about half of all mothers felt valued in that role by society.

Other data show that mothers are the best models to help growing children move through all the necessary stages of brain development. Thus, absent or ineffective mothering can stunt childhood brain growth, negatively affecting both families and society.

Stable marriages and stable parents—both mothers and fathers— are the key factors that determine a child’s well-being. And dysfunctional children contribute to an increasingly dysfunctional society.

I added that our students’ gospel perspectives equip them to understand marriage and parenting far better than most people do now. If our students of either gender were asked to tell other American law students what mattered most in their lives, their general priorities would probably sound much like President Benson’s. That made it all the more important for the women in that group to gain a sound legal education and the analytical skills needed to help a society that is confused about marriage and family life. In summary, I said, almost nothing is more important than motherhood and fatherhood. At the same time, the Church encourages women to gain all the education they can, including, if they so choose, law school. And we all need prayerfully to apply these sometimes competing principles to our own circumstances. The Brethren have confidence in our ability to do that.

The way many of our students had aligned themselves with only one of these principles illustrates today’s tendency to live at just one end of a bipolar world. At times we judge other Church members too harshly, not allowing them the space to make personal judgments. Learning to understand and live with competing true principles is an essential skill—not only for law students but for all the rest of us. As we do that, we will learn for ourselves that “by proving contraries, truth is made manifest.”

Examples from the Scriptures

We can also feel the discomfort of ambiguity in our choices to make sacrifices for the Lord or the Church in the face of uncertainty about possible outcomes. Often, probably too often, we speak of real sacrifice far too glibly, not acknowledging the ambiguity and anxiety we might honestly feel before bowing our heads in submission before God—especially when we can’t possibly understand all the reasons why we must sometimes give so much when we know so little. As John Tanner said in describing the heroic sacrifices of pioneerlike family members, “In stories like these it is easy—too easy—to see the faith and miss the fear. But you can’t miss the fear and trembling when it is your own history.”

The scriptures repeatedly illustrate this process—part of the core doctrine of walking by faith (see 1 Nephi 3:7). Think of the profound ambiguity in the moment when Abraham stood with a raised knife over his precious Isaac, knowing that the requested sacrifice contradicted everything that mattered to Abraham: the promises about his only son, his posterity, his promised land—everything, that is, except his unconditional love for the Lord.

Esther knew that her people were fasting and praying for her, but she also knew that she was risking her life by approaching the king. With fully informed faith, Esther said, “So will I go in unto the king, which is not according to the law: and if I perish, I perish” (Esther 4:13–16; emphasis added). The three young Israelites approached the fiery furnace in Babylon with the same conscious mindset: “Our God . . . is able to deliver us . . . and he will deliver us . . . , O king. But if not, . . . we will not serve thy gods” (Daniel 3:17–18; emphasis added).

Moroni faced the apparent contradiction of being tasked with writing a final witness on sacred plates, yet “because of the awkwardness of our hands” he felt unable to write with power, saying, “I fear lest the Gentiles shall mock at our words.” Then the Lord taught him that if he would humble himself, He would turn the weakness to strength (see Ether 12:24–30).

The Lord has a way of helping us resolve our ambiguities in ways that both stretch and strengthen us. If we can resolve ambiguities with a believing attitude, our faithful choices will lead ultimately to our sanctification. Those whose faith is not blind “see with their eyes, and hear with their ears, and . . . understand with their heart.” And that complete use of our faith senses will one day bring us to the feet of Him who said, “and I should heal them” (Matthew 13:15). 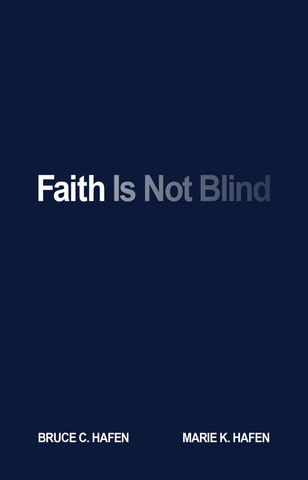 To read more profound insights from Brother and Sister Hafen about the type of faith that complements intellect and reason, pick up a copy of their new book, Faith Is Not Blind, available at Deseret Book stores and deseretbook.com.