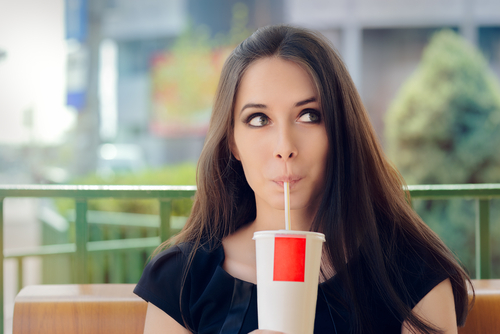 Caffeine: What the Prophets Have Actually Said

When it comes to the Word of Wisdom, without fail there is always one topic that creates a stir of controversy: caffeine. Even as early as 1918, an article in the Church's magazine the Improvement Era debated the effects of drinking caffeine and whether or not coca-cola was a suitable drink for Church members, stating, "The coca-cola habit has made rapid inroads into the lives of an unsuspecting people" (Improvement Era, vol. 21, March 1918).

Church members and even leaders vary on their views of caffeine, generating personal convictions that can sometimes cause conflict between Latter-day Saints.

In 1937, Elder John A. Widtsoe and his wife, Leah, wrote the first major book on the Word of Wisdom, speaking strongly against caffeine, saying, “Whenever a drink is advertised to 'give you a lift,' the 'lift' is likely to be caused by the drug which it contains. Such soft drinks are decidedly harmful and habit-forming, even though sold by the millions. Such caffeine-containing drinks, offered by every soda fountain and most eating places, and consumed in large quantities, should be known and avoided.”

Yet, just a few decades later, President David O. McKay demonstrated a much more lenient view of caffeine when a theater employee apologized for giving him a cup with the coca-cola logo. The prophet replied, "I don’t care what it says on the cup, as long as there is a coke in the cup" (What You Don’t Know About the 100 Most Important Events in Church History, see also "David O McKay and the Rise of Modern Mormonism"). And in October 2016 general conference, President Dieter F. Uchtdorf even joked that he survived his transition to becoming an apostle with the help of "many liters of a diet soda that shall remain nameless."

Even when it comes to Church-owned schools or buildings, policies regarding caffeine are not consistent. For example, LDS Business College and the Joseph Smith Memorial Building on Temple Square sell caffeinated drinks while BYU still does not. Regarding BYU's caffeine policy, BYU spokeswoman Carri Jenkins said, “BYU has simply chosen not to sell caffeinated beverages on campus."

With Mormons sharing so many differing opinions (not to mention second- and third-hand sources) it's no wonder fact and doctrine often blur with fiction when it comes to caffeine. So what is the Church's official stance on caffeine? What have prophets said on the topic?

In a 2012 Mormon Newsroom article clarifying media misconceptions of Mormonism, the Church stated: "Despite what was reported, the Church revelation spelling out health practices (Doctrine and Covenants 89) does not mention the use of caffeine. The Church’s health guidelines prohibit alcoholic drinks, smoking or chewing of tobacco, and “hot drinks”—taught by Church leaders to refer specifically to tea and coffee."

An official statement issued by Church leaders in the 1970s states: “With reference to cola drinks, the Church has never officially taken a position on this matter, but the leaders of the Church have advised, and we do now specifically advise, against the use of any drink containing harmful habit-forming drugs under circumstances that would result in acquiring the habit. Any beverage that contains ingredients harmful to the body should be avoided” (Priesthood Bulletin, Feb. 1972, p. 4).

In 2008, lds.org gave a similar response to the question "Is there anything wrong with drinking sodas with caffeine in them? Is caffeine bad?"

Doctrine and Covenants 89:9 says we shouldn’t drink “hot drinks.” The only official interpretation of this term is the statement made by early Church leaders that it means tea and coffee. Caffeine is not specifically mentioned as the reason not to drink these drinks.

However, we should keep in mind this counsel given by President Boyd K. Packer: “The Word of Wisdom was ‘given for a principle with promise’ (D&C 89:3). . . . A principle is an enduring truth, a law, a rule you can adopt to guide you in making decisions. Generally principles are not spelled out in detail. Members write in asking if this thing or that is against the Word of Wisdom. . . . We teach the principle together with the promised blessings. There are many habit-forming, addictive things that one can drink or chew or inhale or inject which injure both body and spirit which are not mentioned in the revelation. . . . Obedience to counsel will keep you on the safe side of life” (“The Word of Wisdom: The Principle and the Promises,” Ensign, May 1996, 17–18).

While the Church has taken no official stance prohibiting caffeine, Church leaders have made it clear that they encourage Latter-day Saints to focus on the spirit of the Word of Wisdom and treat their God-given bodies with respect. In 2008, an Ensign article shared the harmful effects caffeine addiction and abuse can have on the body, advising members to follow the advice of prophets and be careful about what they put into their bodies.

While modern-day apostles and prophets have made it clear that avoiding caffeinated drinks is not a commandment, some have asked Latter-day Saints to abstain from drinking them.

I am not going to give any command, but I will ask it as a personal, individual favor to me, to let coca-cola alone. There are plenty of other things you can get at the soda fountains without drinking that which is injurious. The Lord does not want you to use any drug that creates an appetite for itself (Conference Report, April 1922).

I never drink any of the cola drinks and my personal hope would be that no one would. However, they are not included in the Word of Wisdom in its technical application. I quote from a letter from the secretary to the First Presidency, 'But the spirit of the Word of Wisdom would be violated by the drinking or eating of anything that contained a habit-forming drug.' With reference to the cola drinks, the Church has never officially taken any attitude on this but I personally do not put them in the class as with the tea and coffee because the Lord specifically mentioned them [the hot drinks]. (Teachings of Spencer W. Kimball).