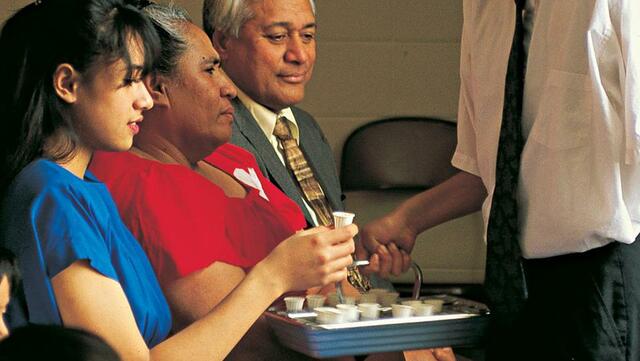 Why do we take the sacrament with our right hand? A look at this symbolic action and its connection to the ongoing Restoration

The Church of Jesus Christ of Latter-day Saints regularly issues revisions to its General Handbook, a guidebook containing principles and specific practices for serving and leading in the Church. In the spring of 2020, an instruction was added in the section “The Sacrament” (18.9.7): “Members partake with their right hand when possible.”

The Latin word sacramentum . . . literally means “oath or solemn obligation.” Partaking of the sacrament might therefore be thought of as a renewal by oath of the covenant previously made in the waters of baptism. It is a sacred mental moment, including (1) a silent oath manifested by the use of one’s hand, symbolic of the individual’s covenant, and (2) the use of bread and water, symbolic of the great atoning sacrifice of the Savior of the world. The hand used in partaking of the sacrament would logically be the same hand used in making any other sacred oath. For most of us, that would be the right hand.

He also mentioned that, for different reasons, not everyone is able to use their right hand but that whichever hand is used, he emphasized that it is most important to focus on remembering the atoning sacrifice of the Savior Jesus Christ.

► You may also like: The Surprising and Meaningful History Behind the Word "Sacrament"

The Church of Jesus Christ of Latter-day Saints has a long history of encouraging members to use the right hand in partaking the sacrament with repeated mention by leaders in various publications between the late-1800s and the mid-1900s that it is “customary” or “advisable” (but not required) to use the right hand. However, it appears that this is the first time since the 1930s that this counsel has appeared in an official handbook. Thus, this may be another example of the ongoing Restoration to which President Nelson has referred.

This new instruction has resulted in quite a bit of discussion online. Unsurprisingly, online commentary has been all over the map. Essays and commentaries come from a wide range of perspectives, from those who state that this simply puts in writing a common understanding to those who have been active members for decades but have never heard any such instruction. Some think it is way too “nit-picky” while others like the symbolism. One commentator expressed concern that this approach seems to privilege right-handed people or denigrate left-handed people.

For me, the new instruction coheres with my own Episcopalian upbringing, what I learned as a convert to The Church of Jesus Christ of Latter-day Saints, as well as what I have observed in my life-long study of, and experience with, sacred practices in various faiths.

Growing up, from ages 9 to 12 I served as an Episcopalian acolyte, or altar boy. One of the first things I did was assist Father Wilmington at the baptism of my infant brother Keith. Father Wilmington baptized Keith by affusin (pouring water over his head) and then, using his right thumb, placed the mark of the cross on Keith’s forehead. 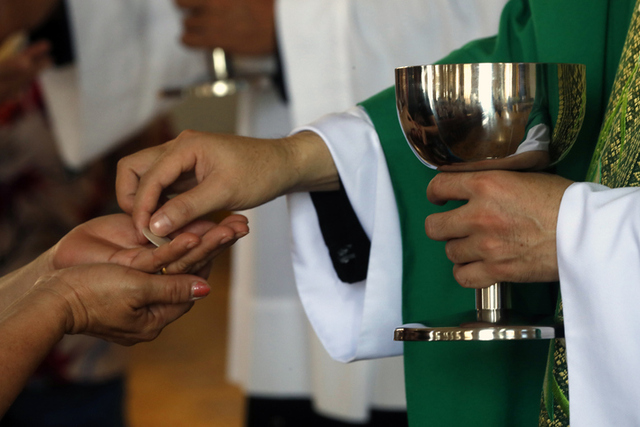 Each Sunday morning, I also assisted Father Ewald as he served Holy Communion (the Sacrament of the Lord’s Supper) to fellow congregants. Father Ewald always used his right hand to bestow the consecrated host (a small unleavened wafer) and those who received it always used their right hand to place the host in their mouths. Like Catholics and Eastern Orthodox Christians, we Episcopalians made the sign of the cross with our right hands.

Even in important secular events, the right hand was used. In concert with those around me, I placed my right hand over my heart when I said the Pledge of Allegiance or sang the national anthem. When I watched the Perry Mason television show, I saw that when a witness swore to “tell the truth, the whole truth, and nothing but the truth,” they raised their right arms. I knew that persons in the military used their right hand to salute each other, and, like everyone else, I extended my right hand to greet others in a near-universal sign of fellowship.

Between the ages of 13 and 18, I began worshipping more at the altar of athletics and witnessing the unholy sacraments of California’s 1970s party scene. However, in 1977 at age 18, I experienced a sudden and profound conversion to The Church of Jesus Christ of Latter-day Saints.

In most ways, my new faith was quite different from the Episcopal faith of my youth and the Catholic faith of my closest friends. However, it was familiar that often the right hand was used for religious practices. This included sustaining members in callings and raising the right hand to the square when performing a baptism. It was explained to me that I should use my right hand when I partook of the sacrament bread and water, and I observed that it was clearly important in the temple as well. Using the right hand to receive the emblems of Christ’s body and blood seemed natural and, well, right.

Christian and Jewish Use of the Right Hand

As part of my work with the American Families of Faith project, I have been privileged to attend services of various faiths and study their doctrines and practices. Often these religious ceremonies involve the right hand. I believe there is value in learning about these practices when considering the potential significance behind this new line in the handbook.

The following is part of an explanation about placing the sign of the cross on one’s self from a website of an Orthodox Christian church: “Because the Lord separated the sheep from the goats, putting the faithful sheep on His right side and the goats on the left, the Church always treats the right side as the preferred side. We only cross ourselves with our RIGHT hand. The priest, when blessing a person, first touches or points to their RIGHT side, then their left. . . . The priest always gives communion with his RIGHT hand, even if he is left-handed” (emphasis in original).

Even though Catholics and Eastern Orthodox Christians cross themselves differently (Catholics touch left shoulder first, Orthodox touch right shoulder first), they both use their right hands for this sacred action. 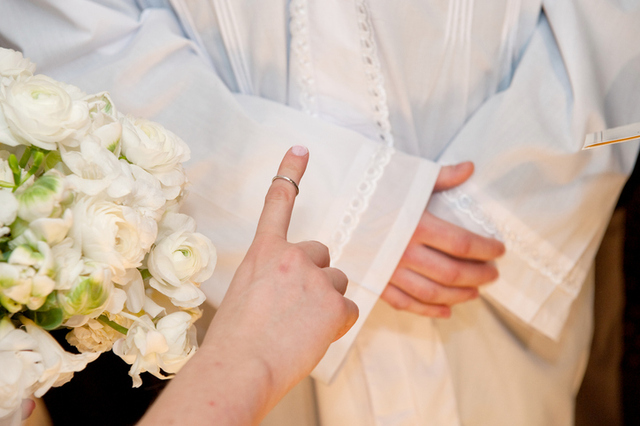 In Jewish weddings, the groom places the wedding band on the bride’s right index finger and says, “With this ring, you are consecrated to me according to the law of Moses and Israel.” During Orthodox Christian weddings, “the priest will join the right hands of the couple. This is an ancient symbol of marriage.”

In Christian iconography, the Harrowing of Hell depicts Jesus, following His crucifixion, triumphantly appearing in the world of spirits and, with his right hand, grasping the hand or wrist of Adam and Eve to lead them and others from the bondage of hell to spiritual freedom. Medieval Catholic depictions of Christ and Orthodox icons also show Christ displaying various signs of benediction with his right hand. 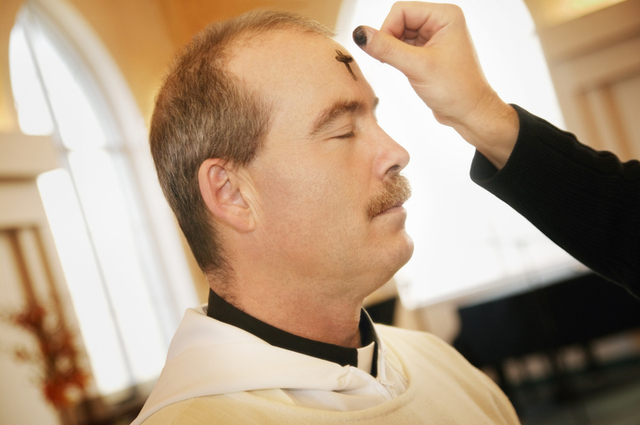 Catholic priests use their right thumbs when they administer the sacrament of anointing the sick with oil and when they place a cross of ashes on the foreheads of parishioners on Ash Wednesday. They also extend their right hand when making the sign of the cross over their congregations and when providing absolution during the sacrament of penance (reconciliation or confession).

There are many biblical verses about the right hand of God. The Psalmist states, “Nevertheless I am continually with thee: thou hast holden me by my right hand” (Psalm 73:23). When a lame man sitting at the gate of the temple asked Peter and John for alms, Peter, “took him by the right hand, and lifted him up: and immediately his feet and ankle bones received strength” (Acts 3:7). Stephen, the first martyr, saw Jesus “standing on the right hand of God” (Acts 7:56). 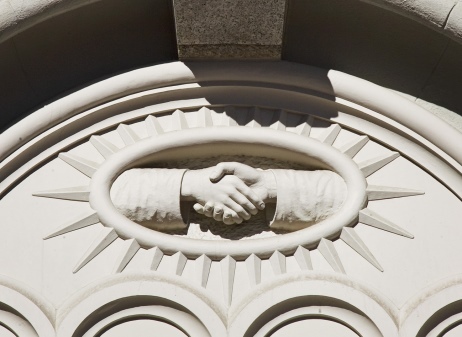 In a number of Christian faiths, “The Right Hand of Fellowship” is offered to each other as a sign of covenant. Shaking hands with the right hand is an ancient and widespread practice that may well have its roots in ancient religious practices. The exterior of the Salt Lake Temple even includes clasping right hands as a symbol of equality and the act of entering into covenants with God.

► You may also like: 5 Fascinating Symbols on the Salt Lake Temple + the Meanings Behind Them

The Power of Shared Ritual

Our contemporary culture celebrates uniqueness and individuality in dress, music, media, food, and many other domains. This can bring wonderful diversity of expression and preference. However, many forces today seek to divide people into various groups based on one’s differences, and our world has become increasingly tribal as division, separation, and stratification permeate society. Many people chafe at conformity or communalism and view efforts to encourage specific actions as unaccommodating, insensitive, or even oppressive, such as those who feel that the focus on the right hand is a slight toward those who are left-handed.

But I look at it a different way. The Lord’s prophets seek to develop unity among God’s diverse people in changing and challenging times. The Church’s handbook is a living document provided by living prophets that offers living guidance for more than 30,000 bishoprics, 3,500 stake presidencies, and 16 million members throughout the world. None of these leaders attended years of professional ecclesiastical training (such as the four-year college degrees common in many faiths) to learn their responsibilities and procedures in particular callings. More than half of all Latter-day Saints live outside the United States and a good proportion are converts to The Church of Jesus Christ of Latter-day Saints.

Thus, members and leaders come from incredibly diverse cultures, religions, backgrounds, and experiences—including those who come with little to no religious background. To some degree, they all rely on the General Handbook for guidance. Many may appreciate and welcome this small additional guidance on a sacred religious ritual they will now practice almost every week. As part of an ongoing Restoration, it is a guideline from the Lord’s prophets that can help create unity in wards and congregations around the world.

The handbook does not state a specific reason for using the right hand, but depending on other sacred and solemn personal experiences, a Latter-day Saint might think of using the right hand to partake of the sacrament as pledging one’s allegiance to Jesus Christ, as reaching out to Jesus to be healed, as agreeing to be honest with the Savior, as extending a hand of fellowship to Jesus, as a sign of commitment to keep the commandments, as remembering the squared right arm that accompanies various sacred covenants, or in any other way that has sacred meaning to you personally.

Religious ritual can help us see our shared humanity across various kinds of differences. I have found joy in joining, uniting, and communing with fellow worshipers—brothers and sisters in faith. Using our right hands when possible is a symbolic way of being united in order, meaning, and ordinances.

Gathering together on the Lord’s day to commune with the Lord and with the Saints to remember Christ’s atoning sacrifice by partaking of the sacrament is, indeed, a holy communion.

Lead image from Church Newsroom, all other from Getty Images

David C. Dollahite is a Camilla Eyring Kimball Professor of Family Life at Brigham Young University and co-director of the American Families of Faith project. His views are his own.

Makes You Think Tradition ScriptureTradition,Scripture,Makes You Think
Comments and feedback can be sent to feedback@ldsliving.com